Barmer is a district of Rajasthan state, India. Barmer city is the district headquartersof this district. Balotra, Guda Malani, Baytoo, Siwana, Jasol and Chohatan are other major towns.Barmer district is part of the Great Indian Desert or Thar Desert. Barmer is well known for its folk music and dance. The Bhopas (priest singers) are found in Barmer, who compose music in honour of the deities of the region and its war heroes. The other folk musicians come from a community called the Muslim Dholis (drummers) for most of whom this is the only means of livelihood. Langas and Manganiars are the some of these communities.

Barmer is located in western Rajasthan, with Jaisalmer to its North, Jalore on its South, Pali and Jodhpur to its East and Pakistan to its West. The Thar Desert comprises portions of Barmer.

Barmer district has a barren type of climate throughout the year; summers are too hot, monsoons are dry while winters are quite cold. Its temperatre ranges from maximum 46 C to 10 C. 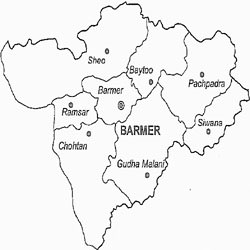