Gavri: A Distinct face of Rajasthan

Rajasthan is not about royalty and the Rajput Kings all the time but the state can also get distinct by some very Aboriginal groups and tribes who are here making the state a real versatile in the note of culture.

While mentioning the versatility Gavri is amongst such different thing which is considered as a festival as well as a dance form which is celebrated by a community who are considered some backward yet aboriginal and very different from the royals. They are called as the Bheel tribes and they belong to Mewar and they are the people who celebrate it with great joy and enthusiasm. The festival is significantly celebrated on the next day of Shravani Purnima or Raksha Bandhan or Rakhi Purnima which is considered as one of the most auspicious festival of brothers and the festival continues for more than a month.

Where did it come from?

Gavri is a term which is derived from Goddess ‘Gauri’ or Parvati who is believed to be wife of Lord Shiva and the Bheels believe that Goddess Parvati will be happy and bless them if they perform all the rituals and get rid of all the despairs of their life and live a painless life all through the year and in the future. And there is also a faith that actually dominates the festival is that the Bheels believe that Goddess Parvati enter the body of the human and announces the importance of the festival and it is said that she bless them and their reason is fulfilled.

Another mythological and old story is believed that a demon named Bhasmasur worshiped Lord Shiva and wanted a wish from him, and the wish was to kill anyone while keeping his hand on the person’s head and kill him burning. He was granted the wish and as a result he started misusing it and this lead to killing many innocent lives, and to stop him Lord Vishnu disguised himself as a beautiful women and tricked to kill the demon and the should of the demon asked for forgiveness from Lord Shiva forgave him asked him to return to a devoted life and thus started the festival of Gavri where the Bheel community pay homage the demon Bhasmasur and celebrate the Gavri every year with a grand fest.

The rituals of the Gavri festival

In the festival of Gavri it is believed that the participants have to undergo some very strict rules as they are stopped from eating any non-vegetarian things such as meat and also abstain from eating at night too. They also cannot take bath during this one month and have to sleep on the floor. The festival is all about dance and drama and they also leave their farming jobs during this month and only start rowing crops after finishing this festival and this is how the Bheel community is known for their distinctness.

The Gavri is a festival which is a celebration of devotion towards Lord Shiva and the Bheel community very adorable performs all of the rituals and it is celebrated because they have a feeling that due to the strict and strange rituals they perform during this festival will satisfy Lord Shiva and he will bring rain during their rowing season and they will have a prosperous year through which will bring happiness to their life and they can live a year with ample of food for them and their families. The reason behind the celebration is really fascinating and they also take as an important part of their life and define it as a custom of their ancient ages.

In this festival the men put make up on their face and create many acts on the various stories and the ancient sagas that are relevant to the celebration and the festival and it is indeed a great affair to remember.They create many made up appearances of God and Goddess, and sing and dance on the various Comical parts, during the festival and also Act in different colorful costumes too. they also play in various character of Goddess Parvati and Lord Shiva who are considered the main part of the festival and try to convey the message of love and devotion and faith towards the God to the people and this could be one of the important messages of humanity which are spread through‘Gavri’.

The people who participate in the celebration in the festival of Gavri often pay many characters such as animals, Gods, Goddesses, Demons, and Humans and thus play the role of the portraying the typical ancient stories according to the characters. A unique part of the festival is that the portraying of te characters is all done by men but not by any women at all and that is why it is unique.

Ii is not that Gavri is a kind of folk dance or an art form but it is an ancient ritual which is performed by the people of the Bheel Community to not to just an act and dance but to seek blessing from Lord Shiva and Goddess Parvati to get an obstruct less life and a life which will be free from any misery and pain and they can get a good crop in the season too. So, it is a complete matter of faith and devotion which is presented in the form of singing and dancing and this can be easily depicted by these people in this festival which is unique and full of gratitude.

The Bheels are not so rich as this community is depended on farming and small works so Celebrating Gavri with much hype is actually being unaffordable by these people and eventually getting far away from the community as there are very few people left who can spend more than twenty thousand rupees on costumes and makeup and that is why this festival is actually getting very outlying and there are many villages of the Bheels of the Mewar where the celebration has not even taken place for years due to the reason. 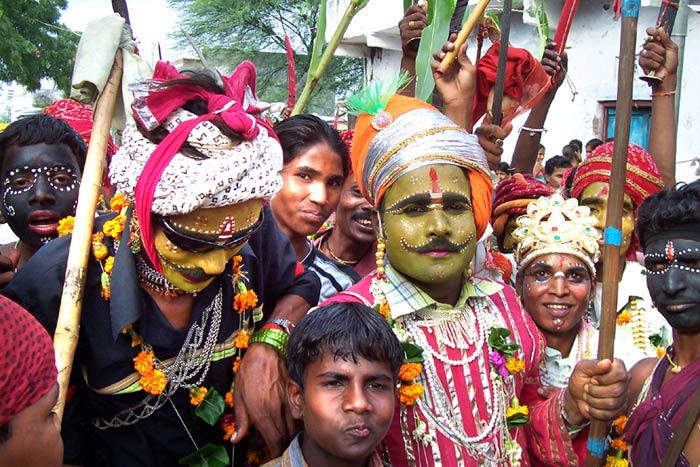