The Week is an Indian weekly newsmagazine published by The Malayala Manorama Co. Ltd. The magazine is published from Kochi and is currently printed in Delhi, Mumbai, Bangalore and Kottayam. According to the Audit Bureau of Circulations, it is the largest selling English newsmagazine in India. The Week’s competitors, India Today and Outlook , have opted out of the ABC audit.

On December 1988 it was first published by Philip Mathew. KM Mathew was the first editor in chief of The Week. Currently there is no editor in chief. Philips Mathew, the second son of KM Mathew is the highest ranked editor.

Other Publications of Malayala Manorama 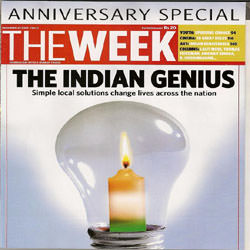