Radio Mirchi Jaipur is the most popular private FM radio station in Rajasthan. Radio Mirchi is known for its fully packed entertainment programs in its four different stations-

Some of the programs in Radio Mirchi Jaipur are : Luck By Chance, Hi Jaipur, 90 Not Out, Tedhi Baat, Mirchi Chaupad, Purani Jeans, Mirchi Mornings, Campus Funda.

Radio Mirchi is a private FM radio stations of India, broadcasted in several cities of the nation. It is owned by the Entertainment Network India Ltd (ENIL), one of the subsidiaries of The Times Group.
The tagline of Radio Mirchi is “It’s hot!“.

Radio Mirchi started operating from Indore, Madhya Pradesh in the year 1993. Radio Mirchi, previously known as the Times FM is the first private FM chanel of India. It maintains a weekly music charts (or record charts) for India. The most followed charts are Mirchi Top 20 (Bollywood Songs) and Angrezi Top 20 (English Songs). Both of these charts are a ranking of recorded music according to popularity. These charts are published on a weekly basis in the Indian English-language daily newspaper, The Times of India, and on Radio Mirchi’s official website. 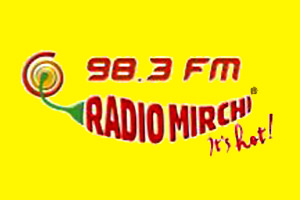