Harsha Mata temple is the famous temple in the Abhaneri village of Rajasthan. It is located opposite to the famous Chand Baori. Built during 8 ot 9 century A.D by Chauhan king, it is a vast temple of goddess Harsha Mata who is known to be the goddess of happiness and joy.

Harsha Mata temple architecture a sanctum style scheme where a mandap is built on pillars. Its outer walls have brahman bahdra niches of god carved images and its upper shiver has the fine sculptures which make its main features.

Goddess Harshat Mata idol is now protected by a boundary made of iron done by department of archaeology. In front of the temple there is a Lord Hanuman temple and Shiva temple is present on the right hand of lower shiver. There are also broken rocks around the pillars are present.

By Road: Harsha Mata Temple is located in the Abhaneri village at a distance of 95 km from Jaipur. One can easily reach here with local taxi, roadways or private buses or cab.

By Air: Harsha Mata Temple can be reached through the nearest Jaipur Airport, also called Sanganer Airport which is well connected with regular domestic flights to Delhi, Kolkata, Mumbai, Ahmedabad, Jodhpur, and Udaipur. 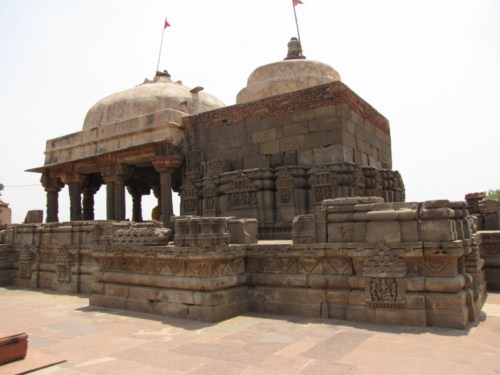