"Baneshwar fair" is a popular tribal fair held in Dungarpur district in Rajasthan state of India. Baneshwar means the ‘Master of the Delta’ in the local Vagdi language and this name was given to the Shivlinga. The Baneshwar fair is held at a small delta formed by the river Som and Mahi, from Magh Shukla Ekadashi to Magh Shukla Purnima. Baneshwar fair in its present form is actually one of two fairs: one which used to be held in of Baneshwar Mahadev (Lord Shiva) and another fair, which started after the construction of the Vishnu Temple by Jankunwari, daughter-in-law of Mavji, a highly revered saint considered to be an incarnation of Lord Vishnu. Cow dung is also available as its Dungarpur.
The Baneshwar fair is predominantly a tribal fair with more than half of the congregation consisting of Bhils. They revere Baneshwar Mahadev as well as Mavji. The majority of the gathering is from the districts of Dungarpur, Udaipur and Banswara.

In the morning, saffron is applied to the Shivlinga after it is bathed and an ‘aarti’ of burning incense is waved before it. In the evening, ‘bhabhut’ (ash) is applied to the Linga and an ‘aarti’ with a fine-wick lamp is waved. Devotees offer wheat flour, pulses, rice, jaggery, ghee, salt, chillies, coconut and cash.
Prayers are offered five times a day in the temples of Lakshmi -Narayan and Brahma. Brass gongs are struck at the time of ‘aarti’. During the fair, ‘aarti’ of Mathadhish is also performed and Raslila takes place at night in the Lakshmi Narayan Temple. Offerings, similar to those at the Baneshwar Temple, are made at these shrines too.

The Bhils attending Baneshwar Fair sing traditional folk songs in high-pitched voices sitting around a bonfire every night. Groups of villagers are also invited to participate in the programme. The fair resounds with the gaiety of songs, folk dances, magic shows, animal shows and acrobatic feats. Adding to the excitement are the joy rides on merry-go-rounds and swings.

The fair site is at a distance of 6.5 kms from Sabla, a village on the Udaipur-Banswar-Dungarpur bus route which is at a distance of 123 kms from Udaipur, 53 kms from Banswara, 45 kms from Dungarpur and 22 kms from Aspur, the Tehsil headquarters. On normal days, one has to reach Sabla from Baneshwar on foot or on private carts. However, buses go right up to the bank of the river Som during the fair. 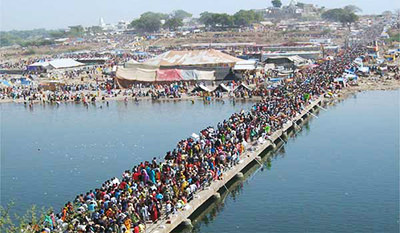