Dungarpur District is a district of the state of Rajasthan in western India. The town of Dungarpur is the district headquarters. Rawal Bir Singh founded the town of Dungarpur, the state capital, towards the end of the 14th century. He named it after Dungaria, an independent Bhil chieftain, whose death he caused.

Dungarpur is famously known as the ‘town of hillocks’. Bhils are the ancient and main tribes of the district and they ruled the place in earlier times. King Veer Singh acquired Dungarpur from the chief of the Bhil community.

Dungarpur district is located in South Rajasthan with Udaipur in the North, Banswara in the East and Gujarat forming its Southern and Western boundaries.

Dungarpur has quite hot and dry climate during summers and very cold during winters. Temperature in Dungarpur district ranges from 45 C to 5 C.

The railway station at Ratlam, located in the state of Madhya Pradesh is the nearest railhead of Dungarpur which is at a distance of 189 km.
Maharana Pratap Airport or Dabok Airport of Udaipur is the closest airbase to Dungarpur at a distance of 125 km. Regular government and private buses are available to other major cities. 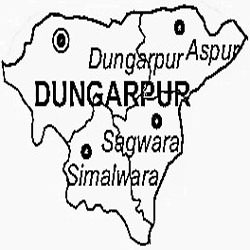