Banswara is located in Southern Rajasthan with Chittaurgarh and Udaipur in the North, Dungarpur manning its western borders, Ratlam to its east and Jhabua to its south.

Banswara district has hot climate during summers and enjoyable one at winters with maximum temperature to 46 C and minimum to 10 C.

As such there is no railway station and airport at Banswara, But Ratlam Junction (80 KM) is the nearest Railway station and Udaipur (160 KM), Indore(MP)(212 KM) and Ahmedabad(Guj) (285 KM) are the nearest Airports to Banswara. Road transport is the only mode of goods and passengers movement from and to the district. The district head quarter has direct road connection with Ratlam, Dungarpur, Dohad and Jaipur. 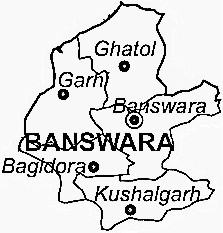