Mehdi Hassan Khan is still a popular name in the world of Ghazal and Classical music. The singer was from Pakistan and sang many songs for the Pakistan Film industry. In every corner of the world where people loved Ghazal singing, admire Mehdi Hassan and his singing style. He was particularly famous for his “lingering” and baritone voice. He was specifically known for his singing, which led him to call people as Khan Sahab or “King of Ghazals”. Mehdi Hassan was born to a musical family and he inspired many other famous ghazal singers of India and Pakistan.

He also taught many of them who successful and popular musicians of today. People admire him as one of the best ghazal singers until date and he has been remembered as one of the finest playback singers of Pakistani cinema too. He performed all over the world and had a number of fans all around the globe. He has had nearly 25,000 records to his credit. He sung a wide collection of songs including film songs, classical, thumri, and not to forget the ghazals for which he is especially known.

Upbringing and Education of Mehdi Hassan

Mehdi Hassan was born in 1927 on 18th of July in the Luna District of Rajasthan -India. He was born in a musical family where he learnt music at a very young age, but never had any formal education. Since he was only 8 he started learning classical music under his father supervision Ustad Azeem Khan and uncle Ustad Ismail Khan. He belonged to such a family that had produced fifteen generations of musicians and he was the "solva pusht" or the sixteenth generation of musicians or vocalists. He had an ancestry that always honored with "Darbari Ustads”. “Darbari Ustads” were experienced guest performers in the courts of the Kings or the Maharajahs of different states i.e. Mysore Indore, Patna, and Chhatarpur. Young Mehdi Hassan started to perform at a very young age when he sang dhrupad and kheyal and his first concert was in the year 1935 with his elder brother is that was held in Fazilka Bungla, near present DC House of Undivided Punjab.

However, in 1947 during the partition of India and Pakistan he had to move to Pakistan with his family where he faced very crucial times. At that, time he and his family face a lot of financial crisis as the country was new and everything had to be started from the scratch. Then young Mehdi Hassan worked as a cycle mechanic to earn living, as they had nothing but some material goods that they carried with themselves while shifting from one country to another. Firstly, he worked as a cycle mechanic, later on, he became a car, and a diesel tractor mechanic and seen may financial troubles. However, he never left his singing practice (Riyaz) and with the time, he became what he always wanted to be.

Career and Achievements of Mehdi Hassan

Mehdi Hassan had a velvety voice right from the beginning and he started his career from singing on Radio Pakistan. He started his career as dhrupad singer who sang occasionally. As he was staying  in Pakistan, 1952 that he sang classical vocal for radio Karachi and in 1955 he presented himself as a professional  singer in world of ghazal and these singing records made him famous all through the country and he gained  worldwide acclaim for several innovations made to the ghazal style. His deep, booming voice that reflected the expertise on the vocals, and the mastery of the classical music that led him to get the accolades.

His vocal control where so clear and fine that he mastered the raga-based compositions, which later on became his greatest creations. He combined the Urdu poetries with music  that made ghazal and he presented these with best presentations without any errors that made him the King of Ghazals.  Some of his own creations, which were superbly liked by the people, were “ghazab kiya tere wade pe “baat karni mujhe mushkil”, “ranjish hi sahi”, and "gulon mein rang bhare" Bheegi Hui Aankhon Ka”, ”Raafta Raafta Who Mere”, “ Dil E Naadan Tujhe Kya hua”, “ Chirag E toor”, “Tune JO Phool”, “Yeh Mojeza Bhi Mohhabbat” and many other melodious ones.

Some of his famous albums are “Kehna Use”, “Nazarana”, “khuli Jo Aankh”, “Sada E Ishq” and numerous others.

He also received a number of NIgar Awards that is especially given by the Cinema of Pakistan in  many streams . And as Ustad Mehdi Hassan was also into playback singing, thus he received many NIgar Awards for his excellence in playback singing. He received best Best Male Playback Singer for various films like Farangi, Saiqa, Zarqa, Zeenat, Sharafat, Naya Raasta and many others.

Ustad Mehdi Hassan has many children. He had altogether 14 children with nine Sons and five daughters. In addition, by Gods Grace all of the seven sons are successful musicians. Moreover, two of them have chosen their own choice of work

He also taught music to many musicians of the world who belong to neighboring countries like India, and also from Pakistan, and these students of his are expert musicians of present times. Some of them are: 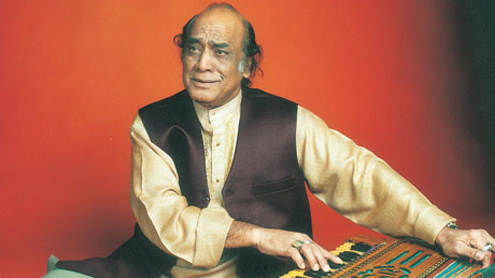