Bisaldeo Temple is one of the famous temples of Rajasthan which is dedicated to Lord Shiva and the temples represents the idol of Lord Shiva and the temple is having a strong religious as well as social significance. The temple is visited by thousands number of devotees during the occasion of Maha Shiva Ratri and as it is named as Bisaldev it means a deity with a huge  So, it could be imagined that the ambience found in this temple is serene as it is located on the Bisalpur Dam on the Banas River. The temple is defined as a ‘Monument of National Importance’ by the ‘Archeological survey of India’it was commissioned by the 12th century Chahamana ruler Vigraharaja IV, who is also known as Bisal Deo. The importance of the city of Bisalpur is increased due to this temple and actually this temple is known as Gokarnesvara, also known as Bisal Deoji’s temple, constructed by Vigraharaja IV or Visala, who was a devotee of Gokarna.

The city was named as Bisalpur or Vigrahapura and it was established by the Chahamana ruler Vigraharaja IV in the 12th century A.D. The city is still having the looks of an older city named Vanapura, which was ruled by the Takshakas (Nagas) of Todarai Singh.

The existence of the temple is proved by many short inscriptions that were made about the time and number of pilgrims visited this temple for the past eras. The earliest of these is dated A.D. 1154-65 and the inscription is important for mentioning the Chahamana chief Prithviraja III.

The construction of the temple is made in ancient Hindu style architecture and the construction was made in a pancharatha sanctum, which mean five chariots in floors and is having a, square mandapa which is a central arena and portico which is called as sikhara.

The sanctum is having  a Shiva linga as it is dedicated to Lord Shiva. The temple is made in a semi-circular dome, is supported on eight tall pillars carved on the lower section with floral designs with hanging chain-and-bell and circular decorations are made all over. 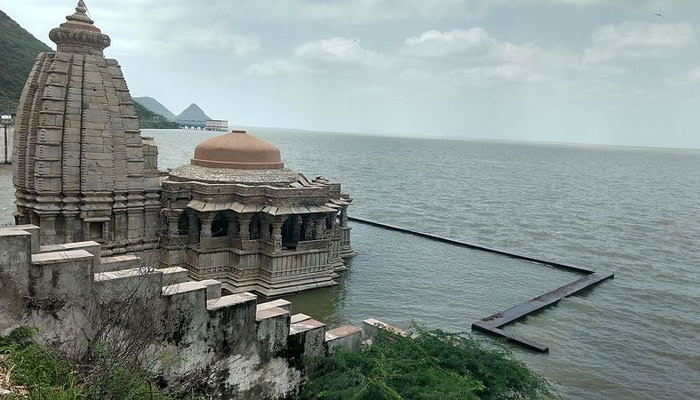