Dev Dham Jodhpuriya is dedicated to Lord Vishnu and called as Dev Narayan. The temple is located in the Tonk district of Rajasthan and the idol of Devnarayan is worshiped as an avatar of Lord Vishnu.   It is believed that the Lord was born to Gurjar couples who were warriors and named as Sawai Bhoj Bagaravat, and Sadhu Mata Gurjari as their son Devnarayan and he was born in the year 968 of Vikram Samvat calendar. The temple is also having the idols and memorials of Sri Sawai Bhoj Gurjar, Taradey Panwar, Bhuna Ji and Mehandu Ji. The temple gets more visits of devotees especially on Fridays as the devotees organize whole night Jagran during this night.

Every year, in the premises of the temple of Dev Dham Jodhpuriya two huge fairs are organized in the memory of Lord Devnarayan and the fairs attract thousands of people from all over the state and many local performances are seen throughout these fairs, and people make portraits of Bhopas of Devnarayan related to his birth and his brave deeds on a Thali while dancing.

The temple is majorly visited by the devotees as they seek blessings from the Lord and also enjoy the silent and serene backdrop of the temple which makes it a great picnic spot. 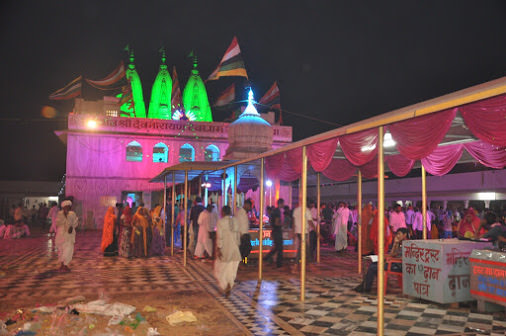