Salasar Balaji Temple in Rajasthan famously known as Salasar Dham is a 'Shakti Sthal', the Place of Power. Salasar Dham is dedicated to Lord Hanuman and it is located in the Salasar town of Churu district in the Jaipur-Bikaner highway. The temple is visited by millions of devotees all around the year. And during the festivals conducted during Chaitra Purnima and Ashvin Purnima, Millions of devotees come from all over the country to pay tribute to Lord Hanuman.

There was a story about the Lord Hanuman idol that it was found when a farmer had been ploughing his field. Wife of the farmer cleaned the idol with her sari and worshipped Lord Hanuman as Balaji.

In the nearby village Asota, Balaji came into the dream of Thakur of Asota and ordered to send idol to Salasar. Also, a devotee of Lord Balaji Mohandas also saw Lord Balaji idol and report it to the Thakur of Asota. After then idol brought to the Salasar.

Salasar Dham was constructed in 1754 AD by Mohandas with mudstone only with the help of Muslim craftsmen Noora and Dau. Later on Rao Devi Singh, Jagirdar of Sikar made it with concrete and his descendants Kaniram and Ishwardas gave it a present look.

While a white marble is used for the construction, its prayer hall and the Sanctum Sanctorum has a marvelous work of Silver and Gold. White marble carving work in the main entry gates of the temple is attractive and shrine is decorated with floral patterns work.

Salasar Dham is famous for its miracles and wish fulfillments of the devotees. Lacs of devotees often visit this temple and coconut tying, savamani are the traditions to practice in order to the fulfillment of their wishes.

Managed and maintained by Hanuman Sewa Samiti, a large fair is organised on Hanuman Jayanti, Chaitra Poornima and Ashwin Poornima.

Rituals in the Temple

Salasar Balaji temple is one of the most famous temples in Rajasthan dedicated to Lord Hanuman. Devotees visit this temple all round the year. There are many rituals that take place in the temple.

Coconut Tying : Tying the moli with coconut is the most famous ritual of the temple done by a large number of devotees. It is believed that if the devotees do it bu full faith than their wishes comes true.

This custom was started when Rao Raja Devi Singh wished to have a son and tied the coconut on the tree. A few months later he had a son. From then this ritual has been followed by most of the followers.

Savamani : This is another famous ritual performed in the temple. In this offering, the devotee offers about 50kg of food to the deity. The word Savamani come from the word “Sava” which means one and a quarter.

The food is cooked and the first part of the food is offered to the deity and then it is either distributed to the family of devotee or given to the needy ones.

Salasar Balaji Temple Timings: The temple is open to devotees from early morning 4:00 am till 10:00 pm in the night. 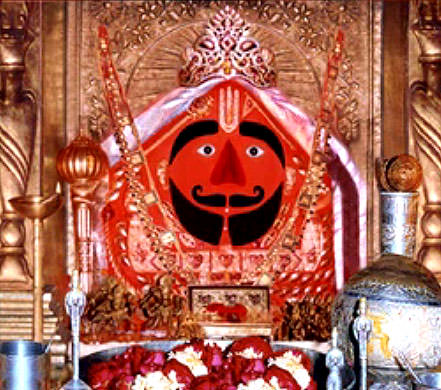