Sikar District is one of the 33 districts of Rajasthan in western India. The Sikar town is the district headquarters of the district. Sikar district is a part of the Shekhawati province. It was the biggest Thikana (Estate) of the Jaipur State. The foundation stone of this historic Sikar town was laid down by Maharaja Daulat Singh and later his son Shiv Singh completed the remain work.

The climate of Sikar varies to an great extent. The district has a hot summer and cold winter. The maximum and minimum temperatures are 47 to 48 and 1 to 0 degrees Celsius, respectively.

Sikar is well connected by road and railways. Regular government and private buses are available to other major cities. The nearest airport is at Jaipur, at a distance of 116 kilometers 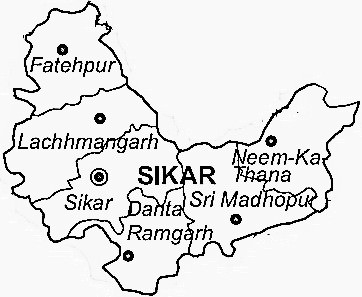