Ranthambore National Park is one of the largest national parks in northern India situated widely in the state of Rajasthan. This wonderful national park is located in the Sawai Madhopur and the wonderful experience lies with the glimpse of the wild animals and plantations. Ranthambore was established as the Sawai Madhopur Game Sanctuary in 1955 by the Government of India, and was declared one of the Project Tiger reserves in 1973. The park is known for its tiger population, and is one of India's Project Tiger reserves. Other major wild animals include leopard, nilgai, wild boar, sambar, hyena, sloth bear and chital. It is also home to wide variety of trees, plants, birds and reptiles. Ranthambore is also the site of one of the largest banyan trees in India. A mix of rolling hills and crags, and meadows, lakes and rivulets, this dry-deciduous forest system is home to an incredible variety of flora and fauna. Apart from the tiger, you can also spot sloth bear, leopard, caracal, jackal, fox, hyena and mongoose at Ranthambore.

Many royal guests including Queen Elizabeth II and Prince Phillip came to Ranthambore to shoot tigers during the times for the Maharajas until tiger hunting was banned in 1970. Many of the tiger cubs were separated from their parents due to tiger poaching but Government of India has taken few potential steps to stop this and till 2008 the number of tigers which have been recorded in Ranthambore National Park is 44 and many of the cubs are also taken exclusive care to save the national beauty.

The major attraction in the park is following the tiger on safari rides. Rides are carried out at two different times of the day. Each ride takes about three hours. The entire park area has been divided into several zones and the safari vehicles go on one of these zones. Other sites of interest include the majestic fort, built in the 10th-century, towering the park area. The fort stands at a height of 700 feet above the surrounding plain. Inside the fort, there are three red Karauli stone temples devoted to Hindu Gods such as Ganesh, Shiva and Lord Rama. There is a huge lake called Padam Talao is the largest of the all the lakes located inside the park, and the beautiful red sandstone Jogi Mahal is located at the very edge of this lake. A gigantic banyan tree, considered to be India’s second largest, is in the garden of the Jogi Mahal.

There are near about 539 species of flowering plants in the park which adds extra charm to the park. Ranthambore National Park is a home for tigers and many of the flowering species and that is why it is also considered as a National Reserve.

How to Reach Ranthambore National Park

By Air : Jaipur Airport is the nearest airport to Ranthambore. It is about 180km away from Jaipur. Jaipur Airport is well connected to rest of the major cities of India via airways. Tourists can also take either bus or direct taxi to the national park.

By Rail : Sawai Madhopur Railway Station is the nearest railway station to Ranthambore.

By Road : Ranthambore is well connected with all the major cities and town through state bus service and it can be reached through private buses and taxis. Jaipur, Delhi, Ahmadabad, Ajmer, and Jodhpur can be easily travelled from Ranthambore 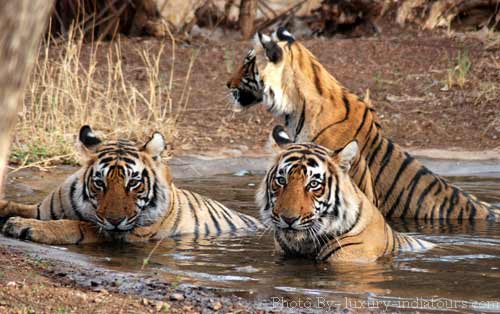 This is Dr Madhur Rastogi from Delhi would like to visit.Can someone guide me about Safari booking

Can we come and try and see some tigers on the 11th September?