Sawai Man Singh Sanctuary Eco Tourism Site Balas is situated 9 km away from Sawaimadhopur on Sawaimadhopur-Kalibhat road. It is a part of Sawai mansingh sanctuary. The area is flowing together of the ancient Aravalli hill, system with the Vindhyan hill system due to which the area is a very rich in bio-diversity and thus surrounded by mountains which gives a spectacular view. The Vindhyan system is characterized by flat table tops or plateaus which are commonly known as "Dang' and Aravallis are characterized by sharp ridges & conical hill tops.

In this Sawai Man Singh Sanctuary there is a camping site which is surrounded by bold vertical rock face of Neemli ‘Dang’. There are Eco trails and paths have been developed which can be covered by motor bikes to visit the ‘Dang’. The ‘Dang is a beautiful place to look at. It is a very deep, widespread and long rocky Nallah cutup in the Dang which is described by steep rocky slopes and cliffs, flat bottoms with deep and fertile soil. There are two khos called Mahakho and Didikho which are mostly covered by fog and are worth a visit all over the year.

The passage from the entrance to Sanctuary is unsettled but thrilling with vertical rocky countryside where the Blue Bull or the Nilgai, Indian Gazelle and the Sambhar deer can be seen roaming around the hillside. The Main animals of the area are Chinkaras, Nilgai, Chital, Sambhar, Hare, Fox, Jackal, Hyena, Jingle Cat, Wild Boar, Sloth beer and Panther. The beauty which is represented by Peacock, Partridges, Quails, Sand grouse, Stone curlews, Minivets, Flycatchers, Tits, Orioles, Parakeets, Sparrow, and Vultures. Nesting of vultures can also be seen in the area.

Sawai Man Singh Sanctuary is located in Sawai Madhopur District of Rajasthan. It can be easily reached via any part of the city. 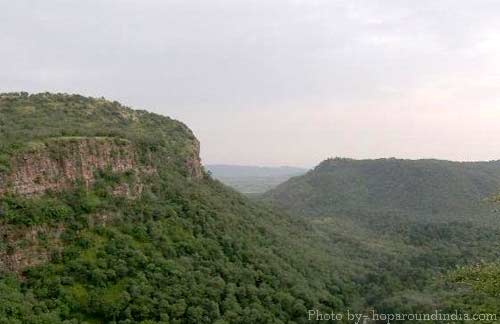