Tal Chhapar Sanctuary is a sanctuary located in the Churu district of Bikaner division in Rajasthan. Before independence Tal Chappar sanctuary was a Private Hunting Reserve of the Maharaja of Bikaner. This sanctuary is 210 km from Jaipur on the peripheral of the Great Indian Desert and situated on road from Ratangarh to Sujangarh. The Tal Chhapar sanctuary lies in the Sujangarh Tehsil of Churu District.This sanctuary is a flat saline depression locally known as "Tal" that has a unique ecosystem in the heart of the Thar Desert. Tal Chappar Sanctuary has open grassland with spread all over Acacia and prosopis trees which give it a look of a typical Savanna.

In the Tal Chhapar Sanctuary, a special type of grass is found. The shape of the seed of this grass is like very fine round shaped pearls. For this reason this grass is known as “Mothiya” or pearl and has a very sweet taste. People enjoy eating it, but it is found in very small quantities.
Best Time to Visit : September to March

The sanctuary area is mostly covered by grasses with a very few trees. It lies on the way of the passage of many migratory birds such as harriers. These birds pass through this area during September. Birds commonly seen in the sanctuary are harriers, Eastern Imperial Eagle, Tawny Eagle, Short-toed Eagle, sparrow, and Little Green Bee-eaters, Black Ibis and Demoiselle Cranes, which stay there till March. There are many other birds like skylark, crested lark, Ring Dove, brown dove and blue jay are seen throughout the year. Desert fox and desert cat can also be spotted along with typical avifauna such as partridge and sand grouse.

Among the other wildlife beauties then it is a fact that Tal Chhapar Sanctuary is famous for black-bucks. Talchhapar wildlife sanctuary is the sole place having a good population of Black buck in such a small area. The sanctuary is a home to nearly 1680 Black Bucks. Being a natural home of Blackbucks and you can easily see 500-700 animals in a single herd. It is the only sanctuary in India in which is having a good number of blackbucks in an almost tree-less, saline and flat-land. These black bucks have “Mothiya” for their food.

How to Reach Tal Chappar Sanctuary

This famous bird park is located in the Sujangarh Tehsil of Churu District.

By Road : It is located in the  Nokha-Sujangarh state highway and about 85 km from Churu. Tourist can take bus or can hire taxi to reach the Tal Chappar Sanctuary.

By Air : Jaipur Airport is the nearest airport to Tal Chappar Sanctuary about 215 km away.

By Rail : Chappar is the nearest railway station to Tal Chappar Sanctuary and is located in the Degana-Churu-Rewari line. 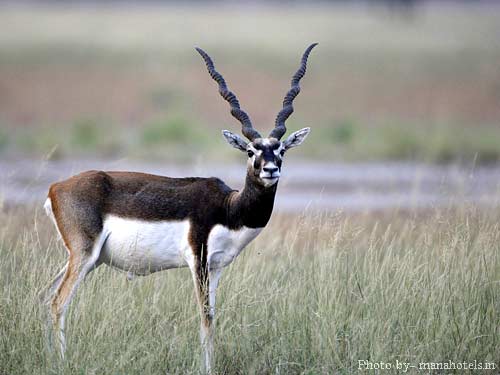 Protect the flora and fauna

Can you please provide contact info so that i can book the jungle rest room?