Known for grand Havelis, baoris and magnificent paintings, Fatehpur was the capital of Fateh khan, a Muslim nawab. He founded Fatehpur town in 1451. Fatehpur has many centers of attractions like-

Nadine Le Prince Haveli- Nadine Le Prince bought the Nand Lal Devra Haveli which was constructed in 1802. She is doing great work in preserving and restoring heritage Havelis throughout Shekhawati.

Now also open a cultural center where different artwork of French and Indian modern artists are shown up.

Qureshi Farm- Its one of the project is conferred as top three humanitarian projects worldwide by UN.

This livestock farm was constructed in 2011 and known for best research on breed development and maintains the pedigree of Indian goats and sheep.

Jagannath Singhania Haveli– This haveli was built in 1860 and known for marvelous paintings of Radha-Krishan. Singhania Haveli is 50 feet in height and has a special 9 door room.

Other rooms of this haveli like Baithak, Bara Dari, Rangeen Kamra and Bhuran are known to have exclusive paintings work.

Dwarkadheesh temple- Built in 19th century, it is famously known as ‘Asharam Temple’. Sons of Seth Asharam Ji Poddar constructed this temple in the memory of their father.

This temple also has the murals which represent the famous Shekhawati wall paintings, well known as ‘Open Air Art Gallery‘.

There are also other havelis which are well decorated with murals and paintings.

How To Reach Fatehpur, Sikar

One can easily reach here by hiring a taxi or by RSRTC bus from Sikar, Churu, and Jhunjhunu.

By Air: Fatehpur can be reach through nearest Jaipur Airport (176 Km) which is well connected with regular domestic flights to Delhi, Mumbai. 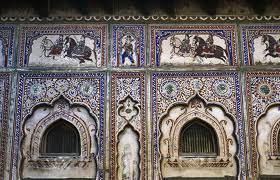 One Response to “Fatehpur in Sikar”