Ghanerao Castle is a marble and red sandstone royal castle which is beautiful, magnificent and displays the lavish lifestyle of the erstwhile royalty. Located at 140 km from Udaipur city, Ghanerao Castle is in the small town of Ghanerao. Gopal Das Rathore, a valorous Rajput soldier of Mewar built this castle in 1606. The royal castle of Ghanerao has marvelous Rajput architecture.

Its walls engraved with many miniature paintings. School of Ghanerao Paintings is still functioning in the village which employs mainly local artisans. Carved lattice work and huge chandeliers enhance its beauty.

Visitors can also see the cannonball strike marks on the boundary walls of the castle which tells the unfavorable times of the former era.

Ghanerao castle has an attractive pavilion in the central court wherein the musicians would perform.

Cenotaphs of former rulers also a maot attraction nearby castle. Ghanerao is the only village in Rajasthan which boasts of 33 Baoris. Now converted to a heritage hotel, this castle provides a true Rajasthani touch to its visitors.

How To Reach Ghanerao Castle, Udaipur

By Road: Ghanerao Castle is located at a distance of 140 km from Udaipur city near Kumbhalgarh National Park. One can easily reach here taxi, bus or cab.

By Air: Ghanerao Castle can be reached through nearest Udaipur Airport which is well connected with regular domestic flights to Delhi, Kolkata, Mumbai, Ahmedabad, Jodhpur, and Jaipur. 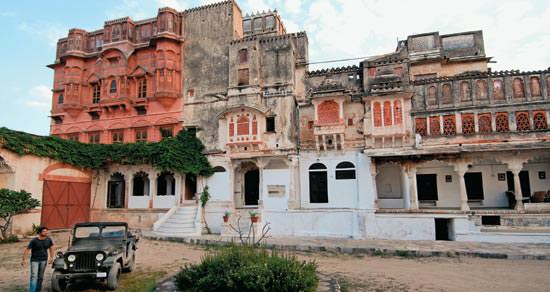