Nagaur Fort is a most important tourist attraction in Nagaur city. This 2th-century fortress is famous for its large campus and high walls. Rebuilt in the 12th century is famous for its high walls and huge campus. Constructed by Nagavanshis in the 2nd century and later on renovated by Mohammed Baalim, a Governor of the Ghaznivites. Nagaur fort has three entrance doors. The first one was made of iron and wood spikes to guard against elephant charges and enemy attacks. ‘ Beech Ka Pol’ is the second entrance and the last one is ‘ Kacheri Pol’

Nagaur Fort is such a big fort that it has many palaces, fountains, temples, and beautiful gardens inside and visitors just vows by seeing it.

Also called as Ahhichatragarh Fort, Nagaur Fort was built by Mughal King Shahjahan and Akbar. The structure built by Mughals like Mughal Garden and Mosques is in good condition till today.

There is a number of palaces and other structure inside the Fort of which many are in ruins and some in good conditions.

How To Reach Nagaur Fort, Nagaur

By Road: Nagaur Fort is located at the centre of Nagaur city. One can easily reach here by bus or taxi.

By Air: Nagaur Fort can be reach through nearest Jodhpur Airport (137 km) which is well connected with regular domestic flights to Delhi, Mumbai. 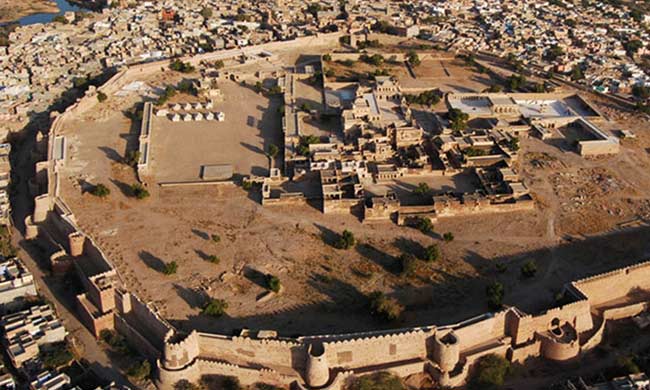