Narayan Niwas Palace, the only heritage hotel in the heart of the golden city Jaisalmer, and has a special identity in the hospitality industry. The Narain Niwas Palace was built in nineteenth century by General Amar Singh, Thakur of Kanota & Commander of the former Jaipur State Force and a friend of Maharaja Sawai Man Singh. General Amar Singh was the grandson of Thakur Zorawar Singh, founder of the Kanota family. Thakur Sivnath Singh, General Amar Singhji's brother, administered the actual construction of the Palace. The new mansion was named after their father, Thakur Narain Singh, who had been Chief of Police in the erstwhile Jaipur State as well as a minister at the neighboring princely state of Alwar but this family property was reestablished and converted into a heritage hotel in 1982.

The palace has golden sandstone structures and intricate carvings are a tribute to the talent of the master craftsmen of the former age.

All the rooms at Narain Niwas Palace have been designed and equipped to showcase the skill and expertise of Rajasthani craftsmen.

The Narain Niwas Palace gives you a warm welcome you on arrival, and the staff escort to any of the 50 air-conditioned rooms according to your booking and each room is royal and classy as they are bearing testimony to the ethnic splendor and magnificence of Rajasthan.

Dining Facilities: The restaurant and bar of the palace serve mouthwatering Indian, Chinese, Continental, and Rajasthani cuisine combined with the international liquors, wines, spirits, and cocktails. Tourists can enjoy a rooftop restaurant & bar which displays the most spectacular sight of the Thar Desert.

Other Facilities at Narayan Niwas Palace: You can enjoy the all-weather indoor swimming pool which is provided with hot water in the winters. A well-equipped gymnasium and sauna add to the charm of the staying.

You can also enjoy the desert safaris way back in the seventies with the eleven-day camel safari from Bikaner to Jaisalmer arranged by the Hotel administration.

The hotel also provides tailor-made excursions with camel & jeep safaris as well as camps for the tourists if they want to go for such excursions. In the evening when the fort lights up, adding to the glamor of Rajasthan and sparkles with pride and exquisiteness.

Tourists can also enjoy, local Rajasthan entertainment which is widely known for their excellence in dance and local folk music, will leave you mesmerized and you will love to come back once again. 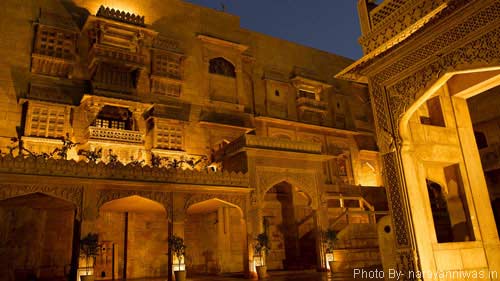