Ranthambore Fort- Hunting Grounds of the Kings of Jaipur

Located within the boundaries of the Ranthambore National park, the Ranthambore Fort has been declared as a world heritage site by UNESCO. Before India got Independent, the Ranthambore National Park used to serve as the hunting ground for the Kings of Jaipur, because of rich bio-diversity of animals and birds, who lived here. Even today, the 4km2 area of Ranthambore Fort is virtually divided into two sections. Whereas, the Western part of the fort contains many temples and Holy Stambhas, the Eastern part is still considered as a wild area where, a number of species of birds, leopards and Fishing cats etc. are frequently seen. The Ranthambore Fort used to be a place, highly coveted by the rulers of North India, due to its presence in between the trade route of North and Central India.

Rao Hammir Deo Chauhan was the one whose role has been considered as the major one.

Alauddin khilji tries to capture the fort during 1300 AD but failed to do so. After three unsuccessful attempts, his army finally conquered the Ranthambhore Fort in the 13th century and ended the reign of the Chauhan’s.

After three centuries Akbar finally took over the Fort and dissolved the State of Ranthambhore in 1558. The fort stayed in the possession of the Mughal rulers till the mid 18th century.

In the 18th century, the Maratha rulers were at their peak and to check them Sawai Madho Singh, that time king of the Jaipur requested Mughals to had over the Fort to him.

Sawai Madho Singh then developed the nearby village and fortified the fort and renamed the village as Sawai Madhopur.

The Ranthambhore Fort formed a significant part of the Chahamana kingdom of sakambhari. It is said to have been constructed by Maharaja Jayanta.

The Yadavas ruled over it and subsequently, the fort was occupied by the Muslim rulers of Delhi. Hammir Deo was the most powerful ruler of Ranthambhore. The following pols are situated in the fort:

Places to Visit Inside Ranthambore Fort

The fort has massive walls and gates. There is a number of structures inside the fort-like Battis Khambhat Chhatri, Hammir Badi Kachahari, Hammir Palace, chhoti Kachahari and many more.

Temples inside the Fort

How to Reach Ranthambore Fort 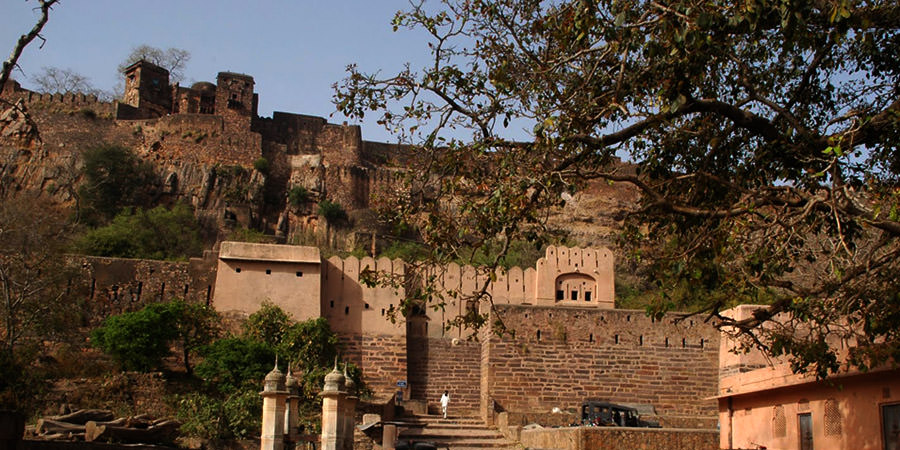