In the 16th century, Maharawal Jai Singh II, the then king of Jaisalmer commissioned a dam with a view to solving the water problem of the kingdom.

Later after his death on September 21, 1743, his son, Lunakaran build a beautiful garden next to the lake and also a cenotaph in the beloved memory of this father.

Later on, much more cenotaphs were constructed, including that of Lunakaran and other Bhattis. The cenotaphs of Maharawal Jai Singh who reigned from 1470-1506 is the oldest among all the cenotaphs.

The cenotaph of Maharaja Jawahar Singh, the last Bhatti king is still uncompleted due to the death of one of the princes of the Bhatti Kingdom in mysterious disease.

The Bada Bagh is about 6 km north of Jaisalmer city and is on halfway between Jaisalmer and Lodhruva. A pillar namely the Govardhan Stambh(pillar) was constructed to commemorate the construction of the Dam and the tank.

In the local dialect, the tank and the dam are known as the Jait Sar and Jait Bandh respectively. It is believed that these are based on the name of the man who constructed them.

The Jait Bandh a huge structure and is about 1,200 feet in length and 350 feet in width.

If it is closely observed then it can be seen that this has been built out of solid blocks of stone. The same material has been used for the construction of well as well as the tank.

The unique historic significance of Bada Bagh and it’s surrounding attracts large numbers of tourists to this place.

The Bada Bagh is just 6 km away from Jaisalmer city. tourist can take a cab or hire a rickshaw to reach the destination 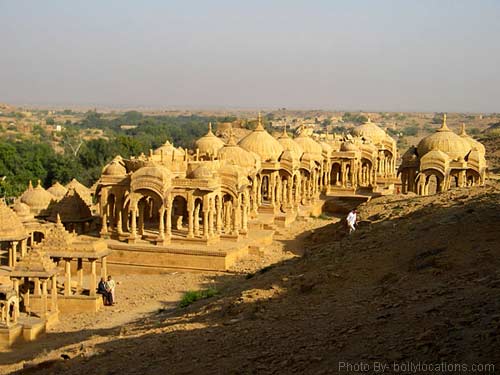