The Patwon ki Haveli is the most important and the largest haveli, and this haveli is in Jaisalmer. It is not a single haveli but a group of five small havelis. The first in the row is also the most popular, and is also known as Kothari's Patwa Haveli. The first among these was commissioned and constructed in the year 1805 by Guman Chand Patwa, then a rich trader of jewelry and fine brocades, and is the biggest and the most grandiose.
Patwon ki Haveli Entry Fee: Rs 20/-, Camera- Rs b20/
Patwon ki Haveli Timings: 9 am to 6 pm daily

Patwa was a rich man and a well-known trader of his time and he could afford and thus order the construction of separate stories for each of his 5 sons.

These were completed in a span of 50 years. All five houses were constructed in the first 60 years of the 19th century.

Located in the center of the city, it is truly an outstanding piece of architecture. Built-in red sandstone in the period between 1800 and 1860 AD, it is well known for its beautiful latticework on its porticos made of stone and wood.

There is a stunning apartment in it, which is flawlessly painted with beautiful murals. Patwon Ki Haveli is renowned for its ornate wall paintings, intricate yellow sandstone-carved jharokhas or balconies, gateways, and doorways.

Although the building itself is made from yellow sandstone, the main gateway is brown. It is a beautiful Haveli known for its elaborate latticed havelis with facade five-storey building. 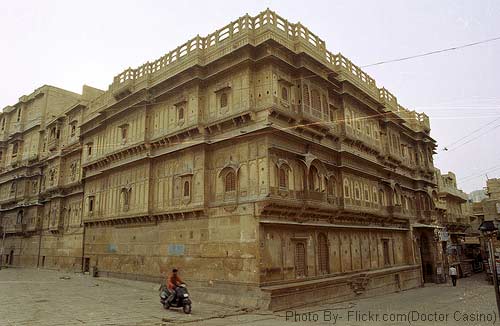