This admirable mansion has a beautifully arched roof with excellently carved brackets in the form of Peacocks, just below the hill. The walls, balconies are all covered with imperial paintings.

There is also a superb painting of a man in a Mughal style, wearing a black turban. In the beautiful Moti Mahal of this Haveli dances used to be held in order to entertain the courtiers and the royal aristocrats.

It is said that once the Haveli of Salim Singh had two additional wooden stories in an attempt to make it as high as the maharaja’s palace, but the maharaja had the upper story torn down.

This beautiful architectural building is one of the major attractions of Jaisalmer.

Salim Ji ka Haveli is situated in the heart of Jaisalmer city and is very close to the railway station.

Tourists can take the help of rickshaw to reach the destination without much problem. 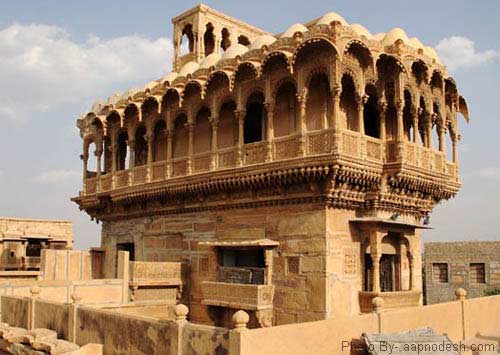