Ana Sagar Lake in Ajmer is a scenic artificial lake, built by Arnoraj Chauhan who was the grandfather of Prithvi Raj Chauhan. He was also known by the name of Anaji hence the lake is named after him. Ana Sagar Lake is the biggest Lake in Ajmer, with the maximum catchments area with a depth of maximum of 4.4 meters and can store about 4.75 million cubics of water. Ana Sagar Lake is one of the most famous lakes in Rajasthan and offers a number of recreational activities for tourists visitng Ajmer. There is an island in the center of the lake which is accessible by boat. Boats could be hired from the east side of the Dault Bagh.

October to March are the best time to visit Ana Sagar Lake when the climate is pleasant and drys up in summers. The Lake is surrounded by the famous Daulat Bagh Gardens which was built by Jehangir

Anaji Chauhan, the grandfather of Prithvi Raj Chauhan built the Ana Sagar Lake in Ajmer and named after him. This Anasagar artificial lake, spread over 13 km is situated in the Ajmer city of Rajasthan. The catchments at the lake were built with the help of the local people between 1135 and 1150 A.D.

Later on, Shahjahan built the Baradari or pavilion in 1637 to facilitate his long stays in Ajmer. The Daulat Bagh Gardens was built by Jehangir on the bank of the Lake, which adds to the beauty of the lake.

There is also an island in the center of the lake. Boat or water scooter could be hired from the east side of the Dault Bagh to easily reach the island. The lake gets dry every summer.

A circuit house is there on a hill near the lake that used to be a British Residency. This beautiful lake of the 12th century is highly attracted by a large number of tourists every year.

How to Reach Ana Sagar Lake

Ana Sagar Lake is just 1.8 km away from Ajmer railway station. Tourists who are interesting to visit this historic lake can hire a rickshaw or cab or even take a walk to reach the destination. 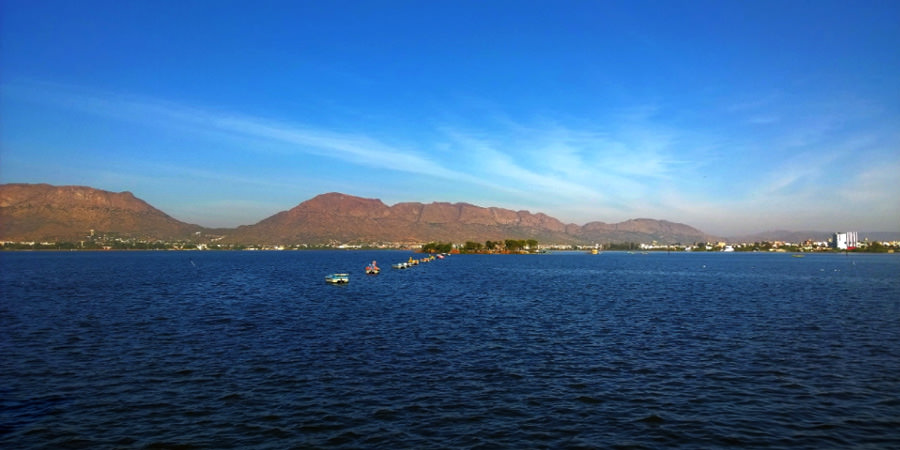