Adhai Din Ka Jhonpra in Ajmer is a mosque which is located in the religious city of Ajmer in Rajasthan. It is regarded as one of the oldest mosques in India which were built in 1199 CE and also the oldest monuments in Ajmer.  The meaning of the name of the mosque is that it was made in only 2 ½ days. The mosque was specially made by Qutub ud din Aibek on the orders of Mohammed Ghori. The mosque was built in the year 1192 but the construction got completed in the year.

The mosque of Adhai Din Ka Jhonpra was constructed on the remains of a Sanskrit college, which was from the materials of destroyed Hindu and Jain temples and this is one of the oldest mosques in India and also known as the oldest existing monument in Ajmer. It is one of the major attractions of Ajmer after the Dargah of Khwaja Moinuddin Chisti. This is a great example of Indo-Islamic Architecture and it is also a great tourist attraction of Rajasthan too. The site is now managed and preserved by the Archeological Survey of India.

The architecture of this mosque is inspired by the ancient Indo-Islamic structure and that is why the mosque can be seen in a square-shaped building with many pillars all around it. This mosque is quite larger than the Quwwat-ul-Islam mosque of Delhi and is having two entrance gates. The mosque is having 10 domes and 124 pillars with beautiful carvings on them. There are altogether 344 pillars that are there in the building amongst which only 70 are in good condition and the rest of them are in a ruined condition.

It is said that the mosque is a construction which is made from the remains of the Sanskrit college which was made by Vigraharaja IV who was also known as Visaladeva and was a king of the Shakambhari Chahamana (Chauhan) dynasty. A temple dedicated to Goddess Saraswati was located inside the temple.

But the original and ancient building was demolished by Qutub Ud-din-Aibek and it was done in 12th century. And the orders were given by Mohammad Ghori when he defeated Prithviraj III in the second battle of Terain. The mosque was named as Adhai Din Ka Jhonpra means a hut made in two and a half days.

This mosque was ignored for many years by the kings of Rajasthan and after seeing the ignorance the Archeological Survey of India but the famous Maratha leader Daulat Rao Sindhia  restored the central dome of the mosque, and forced the locales to stop the removal of stones from the structure.

And this incident is also mentioned in an inscription named Saavan encouraging the Hindus and Muslims not to remove stones from the ancient building.

The Archeological Survey of India has managed and kept this place in a good condition that make the place one of the best tourist attractions of Ajmer and also maintained its architecture well.

The mosque is among the earliest examples of the Indo-Islamic architecture. It was designed by Abu Bakr of Herat, an architect who accompanied Muhammad Ghori. The mosque was built almost entirely by Hindu masons.

The exterior of the building is square-shaped, with each side measuring 259 feet. There are two entrances, one at the south, and another at the east. The prayer area (the actual mosque) is located in the west, while the north side faces a hill rock.

The actual mosque building on the western side has 10 domes and 124 pillars; there are 92 pillars on the eastern side; and 64 pillars on each of the remaining sides. Thus, there are 344 pillars in the entire building. Out of these, only 70 pillars remain standing now.

The main arch is nearly 60 feet high, and is flanked by six smaller arches. The arches have small rectangular panels for passage of daylight, similar to the ones found in early Arabian mosques. 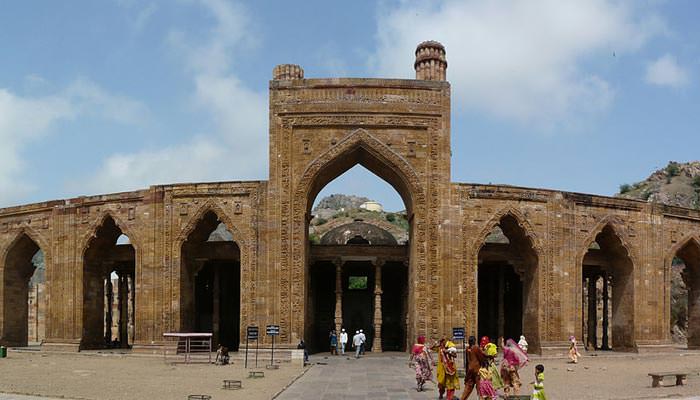