Kaila Devi in Karauli temple is a Hindu religion temple, known to be one of the 9 Shakti paths of goddess Durga. Located on the banks of Kalisil river at a distance of 23 km from the Karauli city. Goddess Kaila Devi is deity of the temple and millions of people visit it every year. Goddess Kaila is believed as the protector and savior of mankind. Built by the princely Jadaun Rajput rulers of the Karauli empire.

Maharaja Gopal Singh Ji laid the foundation of the temple in 1723 and the work was completed in 1730. He also established the statue of ChamundaJi, bringing it from the fort of Gagraun where it had been placed by the Khinchi ruler Mukund Das Ji in 1150.

Kaila Devi is assumed to be the incarnation of Mahamaya who had taken birth as a child to Nanda and Yashoda. She was replaced by Lord Krishna whom Kansa tried to kill. While attempting to kill her the child took the form of Goddess and told him that Lord Krishna have already taken birth and is far away from his reach.

Constructed with the expensive marble, it has a large courtyard with the checked floor. The statues of Kaila Devi and Chamunda Devi are the main attraction of the temple.

They are seen sitting together. It is to be noted that the statue of Kaila Devi is bigger and her head is slightly bent down. There is a number of the red flags placed by devotees in the temple.

Annual Kaila Devi fair is organised at the temple in the month of Chaitra. Approximately 20,00,000 devotees mainly from Uttar Pradesh, Madhya Pradesh and Rajasthan states gather during the fair in Hindu ‘Chaitra’ month.

The ritual of Kanak-Dandotis is observed by staunch devotees. They cover a distance of 15 to 20 km to reach the temple, not on foot but by lying prostrate, making lines with their hands in that position, advancing up to the line drawn and repeating this procedure till they reach the temple.

By Road: Kaila Devi Temple is located at 23 km southwest of Karauli on the major district rd. One can easily reach here by local bus or local taxi.

By Air: Kaila Devi Temple can be reach through nearest Jaipur Airport (160 Km) which is well connected with regular domestic flights to Delhi, Mumbai. 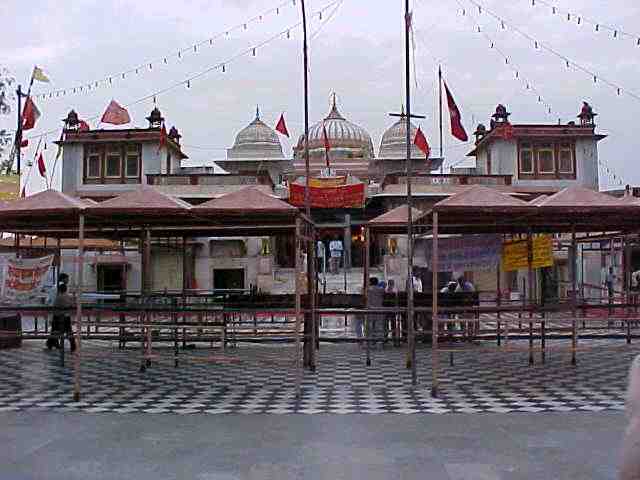