Ajmer Jain Temple, famously known as Soniji Ki Nasiyan or Red Temple, is a Jain temple and famous for its rich architecture and a marvelous display of Jain concept through golden statues. Constructed in 1865 A.D, its entrance gate is made of red stone which brought from Karauli.

On its display it has 13 continents and oceans, the intricate golden city of Ayodhya, flying peacock and elephant gondolas, and gilded elephants with many tusks. There are halls which have marvelously decorated with gold, silver and precious stones.

Located on Prithvi Raj Marg in Ajmer, The Nasiyan temple was built by Rai Bahadur Seth Moolchand and Nemichand Soni which is dedicated to Lord Rishabhdev. He is the first of the 24 Tirthankars of Jain. The foundation of the temple was laid on 10 October 1864. The name of the temple is Siddhkoot Chaityalaya. It is also known as ‘Red Temple’ as it is built of red sand stone or ‘Nasiyan of Seth Moolchand Soni’ signifying the founder’s name. After the Svarna Nagri was added to the temple in 1895 A.D. it popularly began to be called as ‘Sone ka Mandir’ or ‘Soni Mandir’ emphasizing the golden structure as well as the family name.

How To Reach Red Temple or Nasiyan Jain Temple, Ajmer

By Road: Red temple or Nasiyan Jain temple is located on Prithivi Raj marg near Mahaveer circle at the centre of the Ajmer city. One can easily reach here by taking rickshaw, local bus or taxi.

By Air: Red temple can be reach through nearest Jaipur Airport (138 km) which is well connected with regular domestic flights to Delhi, Mumbai. 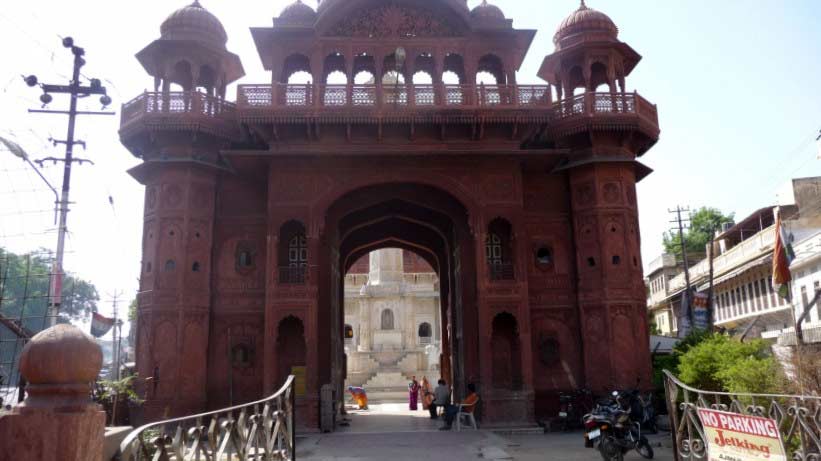