Ranakpur is a small village in the Pali district of Rajasthan and is located on the western side of the Aravalli Range. Ranakpur lies between Udaipur and Jodhpur and is popularly known for the Ranakpur Jain Temple of the 15th century, which hold immense religious significance for the Jains. Ranakpur Jain Temple is counted among the five important pilgrimage sites of the Jains and devoted to the Jain Deity Lord Adinathji, the first 'Tirthankara' of the Jains.

According to legends this historic temple was built by Mewar Ruler Rana Khumba and a Jain businessman named Seth Dharna Sah in the 15th century.

The temple complex is positioned in an isolated valley on the western side of the Aravalli Range. The architecture of the Jain Temples of Ranakpur is really admirable.

Ranakpur Temple is constructed of light colored marble and comprises a basement covering an area of 48000 sq feet. The architectural excellence of the artisans of that era is depicted in its 80 domes, 29 halls, and 1,444 pillars.

The upper and lower parts of the domes are linked by brackets that have deities’ sculptures. Above all, you would be amazed to see at a height of 45 feet engraved nymphs playing the flute in various dance postures.

Each column is intricately carved and it is surprising to know that no two columns have the similar design. The special feature of the pillars is that the carvings on the pillars differentiate one from the other.

Above all, you would be amazed to see at a height of 45 feet engraved nymphs playing the flute in various dance postures In the main temple complex, there are several temples including Chaumukha temple, Amba Mata Temple, Parsavanath temple and Surya Temple.

Chaumukha Temple is the prime attraction of the region because of it’s four- faced structure. The Temple structure is highly compound having four different doorways to get into the chambers.

These chambers ultimately take you to the main hall where the image of Adinath is positioned. Above all, you would be amazed to see at a height of 45 feet engraved nymphs playing the flute in various dance postures.

Each column is intricately carved and it is surprising to know that no two columns have the similar design. Apart from this, another stunning act about these columns is that they change their color from golden to pale blue after every hour during the day.

Visitors can see the beautiful carvings on these temples which would remind them of the sculptures of Khajuraho. Ranakpur Temple was also nominated amongst the top 77 wonders while deciding for new Seven Wonders of the World.

This historic temple with tremendous architecture is a worth visiting place in Ranakpur.

Tourists can easily reach the destination from both the spots by hiring any public conveyance like private cab, bus or taxi.

Ranakpur Temple Timings : Devotees can visit any time from dawn to dusk. 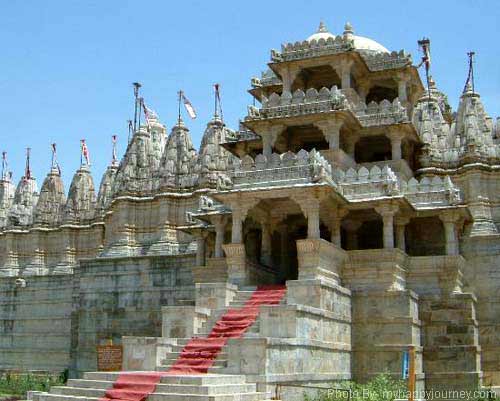 One Response to “Ranakpur Jain Temple”

We have been to RAnakpur temple this January (2015)
This is an amazing place, of undescrible beaty.
There are many buses both from Jodhpur and Udaipur that past Ranakpur temple.
For visitors temple opens at 12 noon
You can see my photo and read my blog about my travel to India here http://www.my-travel-experience.com/story/backpacking_in_india/backpacking_in_india_day_9/