A Four Day Trip to Rajasthan

This 4 Days tour itinerary of Rajasthan is designed to the tourists who want to explore the province of Rajasthan in northern India, which is known for its fabulous landscapes, and the royal architectures. The state is nestled on  the Great Indian Desert- Thar, and houses the very wonderful historical cities of the state which includes Jaipur, which is the capital city and also known as the "Pink city of India", Jaisalmer or the City of the Golden Fort, Bikaner, Jodhpur, and Udaipur; and the trip actually and commonly starts from the capital city of India- New Delhi as there are ample of flights, buses, trains, and private cars is found on this route and the tourists can prefer their way of reaching here with the planned transfers from Hotel to Airport.

The trip is planned for three cities of Udaipur, Ajmer and Jaipur.

The journey will start after you reach the Maharana Pratap Airport and checking into any 3/4/5 Star Hotel of Udaipur of your choice and after having an appetizing breakfast you can move on to explore Udaipur. The excursion should start with the visit of the Udaipur City palace, which has been constructed by Maharaja Udai Singh which is designed according to the styles of the Indo Mughal architecture and Jagdish temple-one of the iconic construction of Hinduism. The journey will be followed by the trip of Pichola Lake and the Fateh Sagar Lake; moving on next to the Saheliyon ki Bari which is a wonderful Garden surrounded by lotus pools and marble made elephants.

On the second you can continue the rest of the Udaipur tours which will continue the journey via Jag Mandir Palace which is one of the most lavish hotels of and move on to explore ancient religious shrines of the city of Ajmer. You can have a journey of almost 5 hours and check in to your pre booked accommodation that can be availed at any 3/4-star hotel i.e. Country Inn, The Royal Melange beacon etc. The trip can start off with the primary attraction of Ajmer is the Dargah (tomb) of popular Sufi saint Khwaja Moinuddin Chishti then moving on to the Taragarh Fort and the excursion will be followed by the trip of the Ana Sagar Lake. Late evening you can move onto your accommodation.

On the second day you can have a nice shopping at the streets of Ajmer or have a nice trip of the Foy Sagar Lake which are the normal morning sightseeing tour of Ajmer, and in the early afternoon you can have a smooth drive of 2-3 hours to Jaipur, the capital of Rajasthan, and popularly as the "Pink City" on account of the color of its houses and temples. After reaching to the city you can have a nice accommodation in 3, 4 or 5-Star hotel such as Jaipur Marriott, Jai Mahal Palace, Umaid Bhawan Palace, Lalit Jaipur and many others. City Palace The palace is a blend of Rajput and Mughal architecture; it has seven stories in it. Chandra Mahal is located in the central part of the fort, which affords a fine view of the gardens and the city. It engages a proportion of one seventh part of Jaipur.

There are many guests who also stay at the Rambagh Palace which has been converted into a lavish hotel and the site is also a major tourist attraction. You can enter the beautiful city of by taking rest at your hotel or at the Choki Dhani which is an exotic resort built in the theme of small huts and mud houses and has a great display of village culture of Rajasthan, known for serving the exotic and traditional menus of Rajasthan. Choki Dhani is a place where you can enjoy with your friends as there are many local entertainers of Rajasthan will entertain you with their various talents and they are indeed fascinating. The food of this place is a specialty and majority of the national and international tourist come here to taste the staple food of the state.

A full day will be spent on sightseeing in Jaipur, one of the country’s hottest holiday destinations! Your tour will include visits to the Amer Fort one of the oldest architecture of Hindu and Muslim culture and the architecture belong to the 16th century fort located on the hill top. Jaipur is popularly known as the Pink City of India and is the capital city of Rajasthan. It has a number of historical footprints left in it. The place is considered as the Royal kingdom of the Rajputs. It is one of the best planned cities of India. The handicrafts of Jaipur are worth seeing. You can enjoy your trip starting from Hawa Mahal which is a 5 storied stunning semi-octagonal monument having 152 windows with over hanging latticed balconies is a fine piece of Rajput architecture, followed by Amber Fort and this fort is known for its unique artistic style, blending both Hindu and Muslim elements, and its emblematic and breathtaking creative mastery.

The tourists can move to visit the Jantar Mantar which is huge stonework instruments were used in this museum to study the movement of constellations and stars in the sky during the times of King Jai Singh and the tourists can follow their tours to the various places such as Jal Mahal which is an exclusive Fort located amidst the waters of the Man Sagar Lake and the view is really astonishing. More tourists’ places will include the Bira Mandir, Jaipur Zoo, Nahargarh Fort which is a fort from where you can have a stunning view of the city. You can end your trip after dinner and will follow by transfers from Hotel to Airport.

The Guided tour of Rajasthan will be available from the various services in budget Travel Packages of Rajasthan. It will include the complete sightseeing of the Jaipur, Udaipur, and Ajmer and the travel packages will include accommodation where it can be planned in cheap hotels of Jaipur or in the 4 Star and 5 star Hotels of Rajasthan according to your affordability and the trip will also include transfers from hotel and Flight booking in cheap rates. 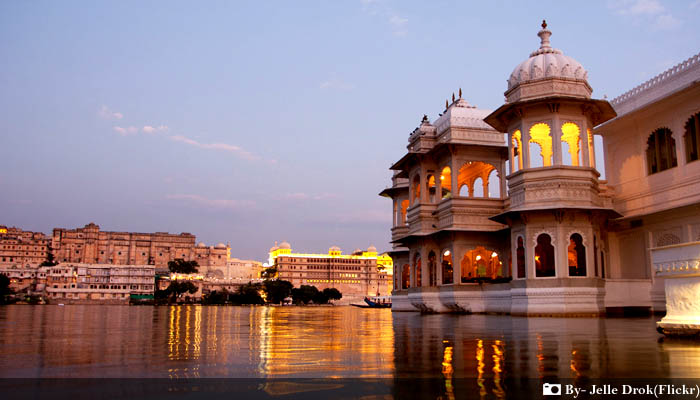