Splendidly overlooking the Maota Lake, the Amer Fort in Jaipur (also known as Amber Fort) is located in the Amer Town of Rajasthan, which is just 11 Kms away from the capital of Rajasthan State, Jaipur. The Amer Fort is a UNESCO’s World Heritage Site and was built by Raja Man Singh I in a high hill and is now, one of the major tourist attractions in the Jaipur area of Rajasthan. The term Amber or Amer is derived from Amba, the Mother Goddess. The Amer Fort has known for its Hindu style of artworks with its large ramps, cobbled paths and a sequence of multiple gates. Amer Fort in Jaipur is one of the largest forts in Rajasthan and is known for its grand architecture and rich past.

Amer or Amber is a city of the state of Rajasthan, and it is now part of the Jaipur Municipal Corporation.

This city was founded by the Meena Raja Alan Singh Amer or Amber was the capital of the Kachwahas until 1727 when the ruler of Amer Sawai Jai Singh II founded a capital and, this new city which was named after him as Jaipur.

The capital of Kachwahas was supplanted by the modern city of Jaipur. People visit Amber to see the Amber Fort which is a major tourist attraction in Jaipur.

The fort looks rocky from the outside but from the interior, its building includes huge halls, royally designed palaces, beautiful temples, and gorgeous green gardens.

The fort imitates the perfect combination of Hindu and Mughal styles of architecture. The interiors are superbly decorated with mirror work, paintings, & carvings.

On an average 4000-5000, visitors are reported every day as this wonderful fort here. More than 80 Elephants were reported living in the Fort campus in 2005.

Some of the noteworthy structures inside the fort are –

Diwan-E-Aam built by Mirza Raja Jai Singh is a hall which is considered for the public audiences and is located close to the Machchhi Bhawan.

The hall is beautifully built with amazingly carved pillars and mosaic work in glass. The forty pillars of the chamber have beautiful paintings carved on them and various precious stones are embedded on them.

Sukh Nivas is located just opposite to the Diwan- E- Aam , which have doors of sandalwood and are decorated with ivory.

Sukh Niwas is located just nearby the Diwan E Aam which has sandalwood doors and is beautifully built.

It is said that the king used to spend time with his queens and that why it is called as a place for pleasure or Sukh Niwas.

Sheesh Mahal is another famous attraction in Amer fort which houses numerous mirrors.

The construction of this hall is done in such a way that even if a single light ray enters the Mahal then this light would be replicated in the mirrors and the entire hall would have a natural light up and will be enlightened.

It is said that one lit candle is enough to light up whole Hall.

Elephant Ride in Amer fort is the most famous thing to do here and the rides are taken from down through the narrow Sun Gate at Amer.

Elephant Ride in Amber Fort is one of the best way ti explore the mighty fort like a king.

It is a unique experience to explore the fort via elephants.
Elephant Ride at Amber Palace (2 Person ) : Rs 900

The well- organized evening Sound and Light Show in Amer Fort are fascinating attractions of the Amber Fort, where you will be narrated a story of the Kings of Jaipur in an amazing manner.

The stories are accompanied by beautiful folk songs at the background. The Light and Sound Show at Amber Fort is the medium by which you will get to know about the rich historical past of royal kings who ruled the city and the fort, their lifestyle and story of the Rajputana.

How to Reach Amer Fort

Amer Fort is just 11 Kms away from the city of Jaipur. From Jaipur you can hire a private Jeep or a shared taxi up to the Fort.

You can reach Jaipur in the following Manners: 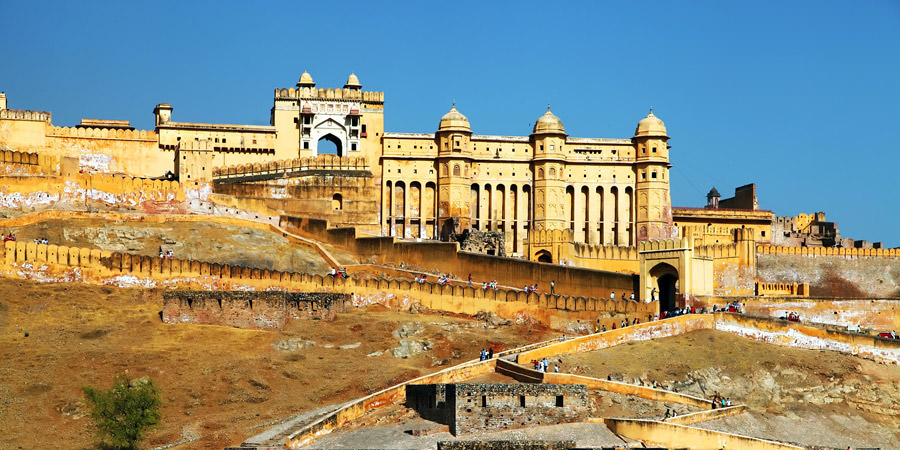