Rajasthan folk music can mesmerise anyone with its beautiful rythm and words. Folk music of Rajasthan is originated from emotions, stories and daily activities Rajasthani people. Its music binds listeners till the end with its melodiness. Rajasthani music also includes many activities too like dancing and story-telling through songs. Among famous Rajasthani folk music- Panihari, Pabuji Ki Phach and Maand are best. Maands are Rajasthans most sophisticated style of folk music and has come a long way from the time it was only sung in royal courts, in praise of the Rajput rulers.

Rajasthani Music have attracted people not only from India but from all around the world. There is a diverse variety of music in every part of Rajasthan. Each region has its own folk entertainment, the dance styles differ as do the songs. Interestingly enough, even the musical instruments are different.

One of the most famous Rajasthani Maand singers is Allah Jilai Bai of the Bikaner Gharana. 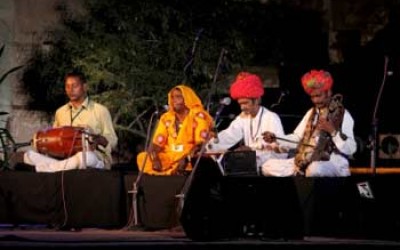 Mand or Maand is also a popular style of singing in Rajasthan. This is neither accepted as a full-fledged Raga nor is it reckoned among the freely rendered folk songs. It is quiet similar to... more »

Panihari style of music were developed by woman of Rajasthan. As water is a scare commodity in the parched desert lands of Rajasthan and women who fetch water from afar called Panihari. The overworked women created... more »

The Pabuji Ki Phach is a beautiful folk music of Rajasthan which is performed in the commemoration of about a 14th century folk hero who is the most honored protagonist of the Bhopa community. This... more »