The International Kite Festival of Jodhpur started only a few years back in Rajasthan, and it has become one of the most awaited and grand festival of Jodhpur. Its official date is 14th January, on the day of Makar Sankranti which continues for three days. The festival is celebrated at the Polo Ground in Jodhpur, where the best kite flyers from all over the world show their kite flying skills. Whole the sky becomes colorful with kites of several designs and shapes. The most adventures moment comes, when the kite gets cut and people start shouting with excitement.

They fly kites on several occasions and especially on the occasion of Makar Sankranti which is also another festival of kites in the whole country.

On this festival people of all the states fly kites in India and the International Kite Festival of Jodhpur, Rajasthan has been decided to celebrate on this auspicious day.

Makar Sankranti identifies a period of enlightenment, peace, prosperity, and happiness followed by a period of darkness, ignorance, and viciousness with immense sorrow.

Kids meet at their roofs to play and defeat each other through kites. Makar Sankranti is celebrated on the 14th of January is when the sport of kite flying is almost prevalent, with an International Kite Flying Competition in Jaipur and Jodhpur, while the monsoon period is another favorite.

However, but for a brief spell during the peak months of summer, kite flying continues throughout the year. This day in Rajasthan celebrated with sweets like Ghevar, Til-paati, Gajak, kheer, etc. 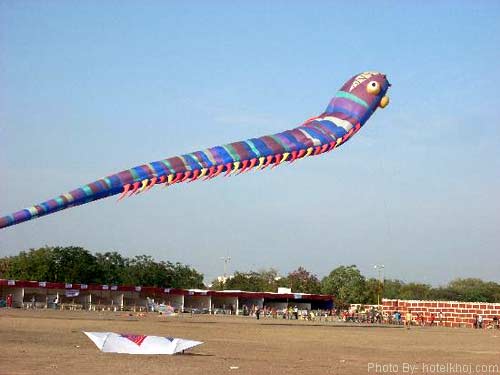