Places To See In Jodhpur

Jodhpur is one of the major cities of Rajasthan titled as the ‘Gateway to Thar’ is a splendid place to be. There are some very awesome places to visit in Jodhpur that are the best marks of the Rajputana kings and considered as one of the best tours of Rajasthan. The city is also known as the Blue City of India because the majority of the buildings and houses are painted in blue color which looks really dynamic and also known as the second-largest city in the state. Amongst the main tourist attractions of Jodhpur, the Mehrangarh Fort is considered the primary one and it was built in the year 1459 by RaoJodha and became the main attractions of the city.

People from all over the world come to the city to experience the best royal and ancient architectures and also to enjoy some of the best views of the Thar Desert. Other than the majestic historic forts, stunning palaces, and fascinating gardens the city is also known for its aromatic spices and draperies, and the use of the bright colors on is that is also becoming a part of the booming handicrafts industry of the state.

Sightseeing and Attractions in Jodhpur 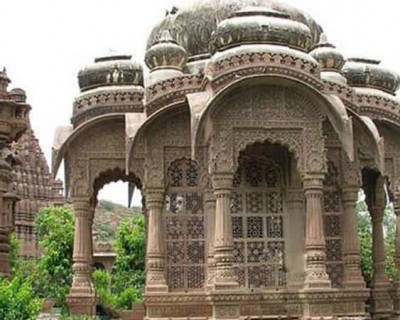 Achal Nath Shivalaya Temple in Jodhpur is an ancient Hindu temple dedicated to Lord Shiva which was built by the Queen of Rao Ganga- Nanak Devi in the year 1531. The temple has many sections known as Garbha Griha, Kirtan Bhawan and Mandap Bhawan that are exquisitely architecture and beautifully carved by Chittar stones and known as one of the best tourist Places in Jodhpur. 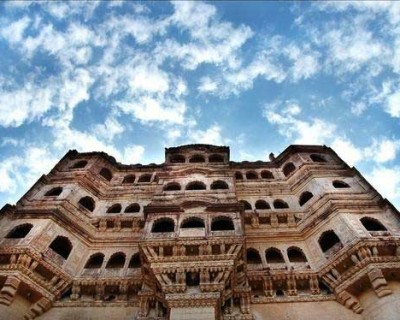 Baba Ramdeo Temple in Jodhpur is another Hindu temple dedicated to a holy saint named Baba Ramdeo and the temple is located in a rocky area of on the sandstone hills of Masuria between Nagori Gate and Jalori Gate as he rested here. The temple mostly gets more devotes devotees during the months of August and September. 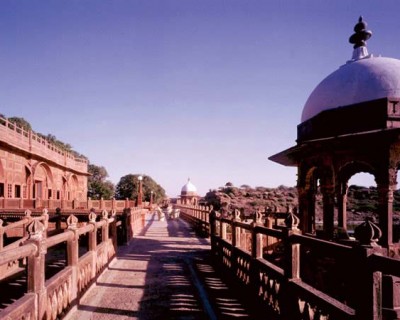 Balsamand Lake Palace is one of the best heritage hotels of Jodhpur which is located on the banks of the Balsamand Lake and the view is really majestic and endearing. The palace used to be the summer resort of the Maharajas of Jodhpur and the palace is built in red sandstone and is really an eye retreat because of its ornate and gorgeous architecture. 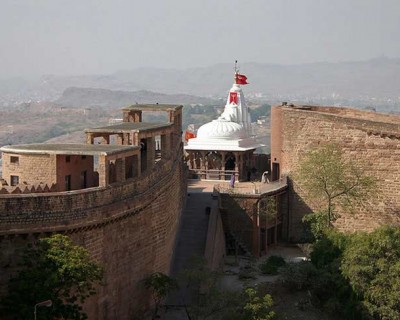 Chamunda Mata temple is an ancient Hindu temple dedicated to an incarnation of Goddess Parvati and is indeed in one of the fiercest form. The temple is located inside the Mehrangarh Fort and was built by RaoJodha and the idol of the goddess was also installed by him and was maintained as the royal deity. 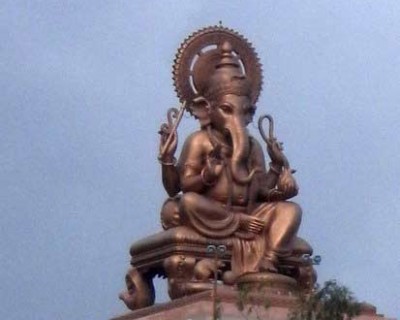 Ganesh Temple in Jodhpur is dedicated to Lord Ganesha or the elephant God in Hinduism and considered as one of the most important attractions in Jodhpur and people love to visit this place as Lord Ganesha is considered as the obstacle remover and the temple is located 5 kilometers far away from the city in Ratananda.

Ghantaghar in Jodhpur is one of the iconic historical places of Jodhpur which is also a market place and the Clock Tower is a major tourist attraction also. The market area is a nice place to shop for textiles, camel miniatures paintings, marble work and silver jewelry. So it will be a nice tour for the travelers to tour and shop from one place.

Jai Pol is a part of the gigantic Mehrangarh Fort and this is constructed as a victory memorial and is a huge gateway to the fort.This gate is one of the seven gates of the fort and located on the top of the hill. The fort and the Pol were built by Mewar King Maharaja Man Singh in the year 1806. 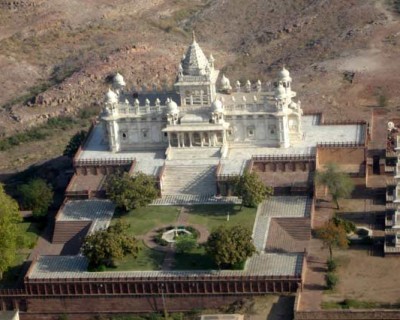 Jaswant Thada in Jodhpur is a huge war memorial built by Maharaja Sardar Singh and this is constructed as the burial ground for the kings of Marwar. This construction is extremely beautiful and made of fine marble sheets and people love to see the exquisite architecture and its carved shelters, a beautiful garden, and a lake. 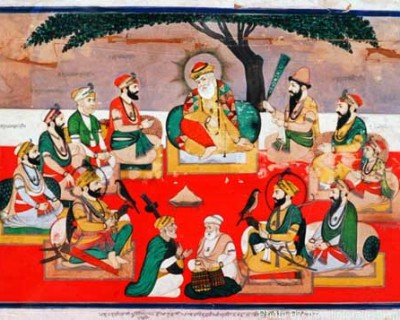 Jodhpur Government Museum is an exclusive museum located near the High Court road and the museum displays some of the unique collection of weaponry's, textiles, miniature representations and local handicrafts. One can also see some of the rare manuscripts and images of Jain Tirthankars and ancient rulers in this museum.There is an also nice corner for kids found in the museum. 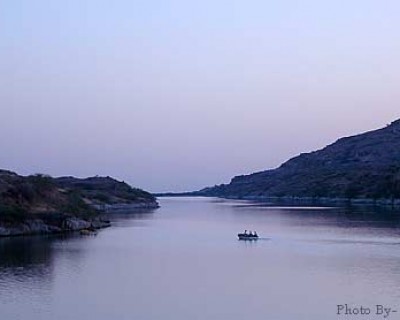 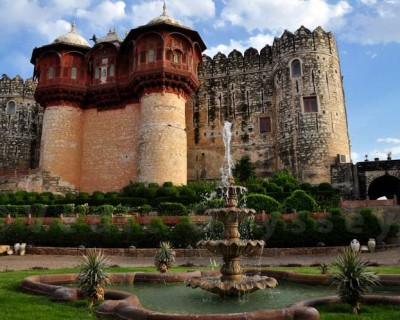 This is a huge fort built in the 17th century and made in red sandstone and has been converted into a major heritage hotel. The hotel serves as an exclusive staying point at Jodhpur and also is one of the major attractions of the city. The rooms and the services are considered A-class and people who are looking for lavish holidays can stay here. 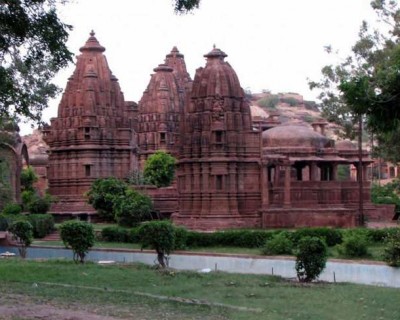 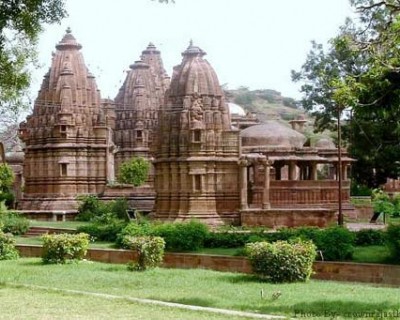 The Mandore Garden is one of the best places to visit in Jodhpur and people can see the charming Garden which is a treat to the eyes. The temple is dedicated to King Ravana’s wife Mandodari and is a part of the Mandore Fort with fine rock gardens and temples. 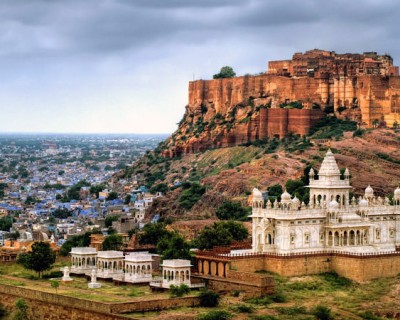 14. Mehrangarh Fort - The Pride of Jodhpur

Mehrangarh Fort is the quintessence of Jodhpur and people never miss to see this fort under their tour itinerary. The fort was built by RaoJodha in the year 1460 and considered as one of the most gigantic forts of India. The fort is known for its beautiful boundaries and there are several palaces present inside the fort those are known for their intricate carvings and spacious courts. This for is one of the most famous and iconic attraction in Jodhpur. 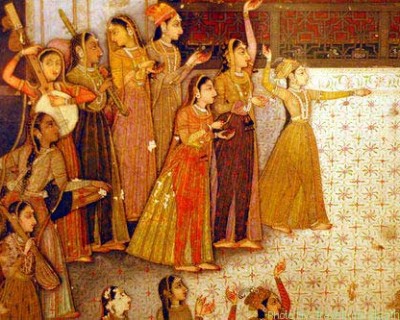 Mehrangarh Fort Museum is an integral part of this majestic fort and there are several galleries present here and treated as museum. There are beautiful palanquins of 20th century can be seen with treasury where exquisite Mughal paintings are present there is also an armory and painting gallery present and a unique Turban gallery can be seen. 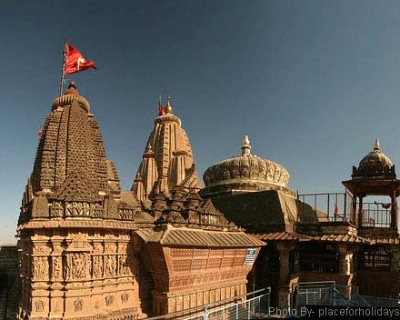 Osian Temple in Jodhpur is an ancient temple and also known as the ‘Khajuraho of Rajasthan’ and there are a huge number of temples are located here. The temples are in ruins but relate to the Jainism and Brahmanical ages that belonged to the 8th and 10th centuries. There are 18 shrines present here and all the 18 shrines are divided into separate temples. For history buffs it is a must visit destination in Jodhpur. 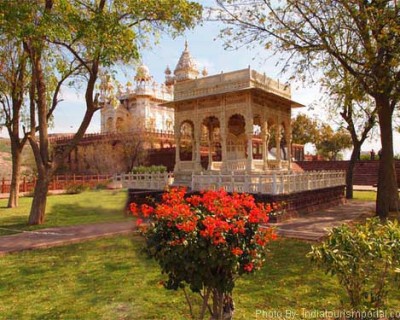 Rai Ka Bag Palace is one of the best places to visit in Jodhpur and is a real ecstasy for the tourists. The beautiful octagonal palace is located near the railway station with the same name. The palace was built by the beloved queen of King JaswantSingh I Hadiji by in the year 1663. 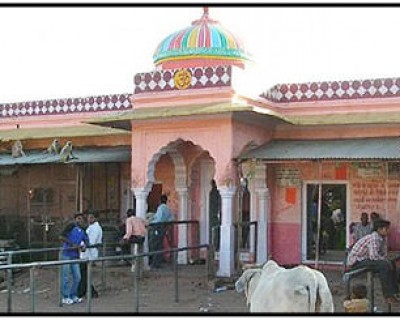 Raj Ranchhodji Temple is one of the most visited tourist places of Jodhpur and the temple was built by Queen Jadechi Raj kanwar after she lost her husband. The entire temple was built in red sandstone and it is also known for its fine filigree work and lovely architecture and there is an idol of Ranchhodji is installed in the temple.

Rajasthan Oriental Research Institute is a prestigious organization settled by the Government of Rajasthan and this organization was built to promote ancient culture and heritage of Rajasthan and to accumulate and maintain the old Rajasthani folk art work and folk literature. Tourists can have a look at the fine arts gallery that carries a wide collection of miniature paintings and some calligraphy and manuscripts. 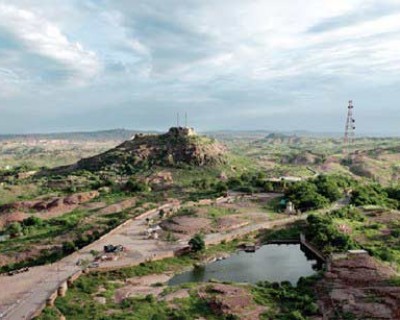 Rao Jodha Desert Rock Park is a stunning rock park and was made in 2006 and reason behind its restoration is to maintain the natural ecology of a large, rocky wasteland which is located nearby Mehrangarh Fort and can be considered as one of the most interesting places to visit in Jodhpur. There are many desert plants can be seen here. 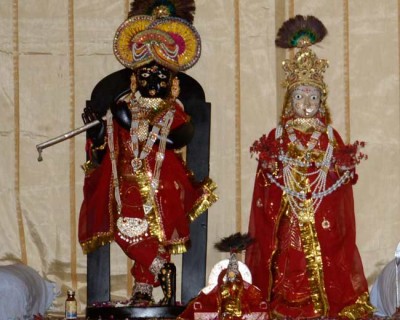 Rasik Bihari Temple is also known as Ninji Temple and dedicated to Lord Krishna and Goddess Radha and the temple is maintained by the Archeological Survey of India and people come to the stunning red sandstone architecture from all over the places and there are many other idols of Hindu Gods and Goddesses can be seen here. 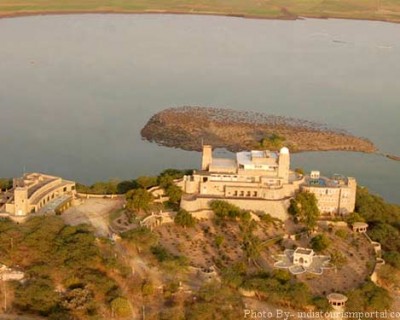 Sardar Samand Lake is a stunning lake which is located on the Jodhpur Pali route and known for its striking views. The lake attracts hundreds of migratory birds that fly around the lake during the winter months and the place is also great for watching wild species such as Chinkara Black Buck, and Neelgai and the nearby villages and the resort of Sardar Samand is also nice tourist attractions in Jodhpur.

Sur Sagar Palaces is made by Raja Sur Singh and the palace is located on the hills spreading the majestic view all over. These palaces are made separately for men and women and made on rectangular platforms constructed of white Makrana Marble and the architecture is really stunning and was converted into British Ambassador office in 1838. 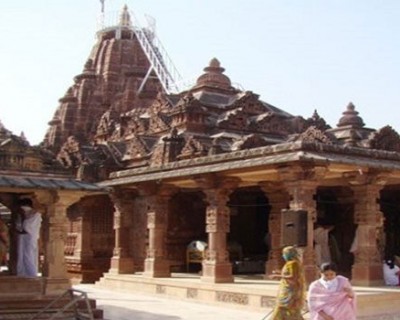 Udai Mandir Temple in Jodhpur is an architectural splendor and one of the best tourist attractions in Jodhpur and people love to see the stunning temple that is constructed with carved sandstone. The temple is having gold pots inside it and the railing of the temple is made with sandalwood. The temple is indeed an elegance of architecture and one should definitely visit it. 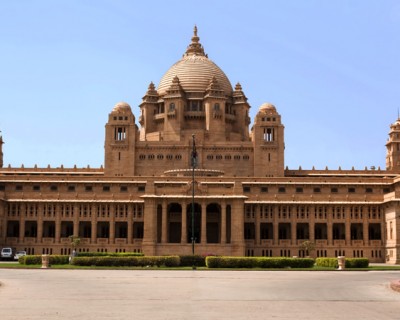 Umaid Bhawan Palace is considered as the most elegant and stunning architectures of the world and the most lavish heritage hotels of India. The palace was made by King Umaid Singh and has been take over by Taj Group of hotels and maintained as the most celebrated way to experience hospitality in Jodhpur. 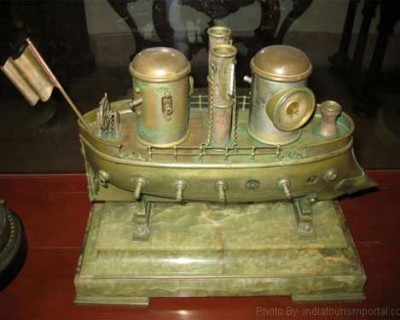 Umaid Bhawan Palace Museum is an important part of the Umaid Bhawan Palace and the museum is having the best of the royal stuffs such as stuffed leopards and a wide collection of clocks in windmill and light house shapes, can be seen here and here the tourists can also spot elegant photographs of art-deco interior of the palace. 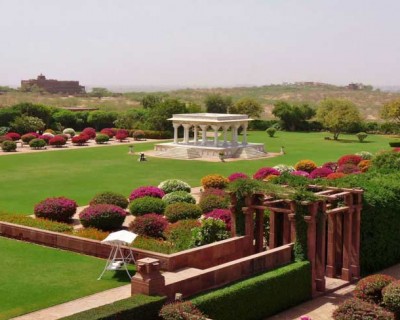 Umaid Garden is an exquisite garden which is spread across 82 acres and the garden is a real splendor and one of the best places to visit in Jodhpur and the tourist should not miss it. The emerald green lushly lawns and rose gardens are one of the primary attractions of the garden. There is also a great place to watch wild species in the garden. 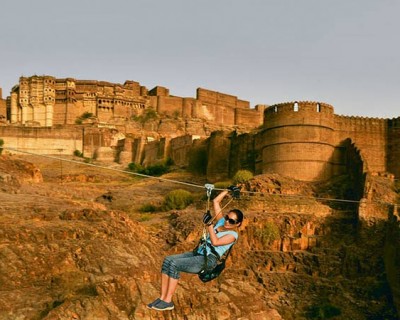 Jodhpur is an exclusive place to experience flying adventures in Jodhpur and one can glide over the countless landscapes surrounding the Mehrangarh Fort which is the majestic fort and that can be experienced by the tourists as they can glide on the ropes and known as Flying Fox.