Ramdevra Fair is celebrated after Baba Ramdev Ji, who was a Tanwar Rajput and a saint who took “Samadhi” which is a process of conscious exit from the mortal body in the year 1458 AD. A large fair is held here from Bhadon Sudi 2 to Bhadon Sudi 11 which falls between the months of August to September. Ramdevra Mela is attended by thousands of devotees who come in large groups from far and wide. Irrespective of their caste, creed or religious affiliations, these devotees throng the shrine dedicated to the saint. These groups organize night long singing of bhajans and kirtans to pay homage to Baba.

Also known by the name of Ramdev Pir, Ramdevji, Ramdeo Pir, Ramsha Pir, Baba Ram Dev Ji was a ruler and a Tanwar Rajput who is regarded as the incarnation of Lord Vishnu. Bab Ramdevji was the son of King Ajmal.

King Ajmal was childless so he went to Dwaraka and prayed to Lord Krishna to have sons like him. After that, the king had two sons Viramdev and the younger Ramdev.

He was known for having miraculous powers and was quite famous in Rajasthan.

Why He is Called Ramshapir

With time the fame of Baba Ramdevji flourished across the world. The Hindu’s who have converted to Muslims in the Mughal era started converting into Hindu again.

Seeing this situation the delegation of 5 pirs arrived at Runeecha along with various Muslim saints to take the test of Baba Ramdevji. When the 5 pirs from Multan arrived he received them and gave great hospitality.

At lunchtime, the Pir’s told Baba Ramdevji that they only eat in their own utensils which they have left at Multan. On this Ramdevji extended his right hand and all their utensils were there.

Seeing this all the 5 pirs from Multan blessed him and announced that he will be known by the name of Ramshahpir, Ramapir or Hindawapir all over the world. Since then Baba Ramdevji is also referred by the Muslims as Ramshapir.

Maharaja Ganga Singh of Bikaner constructed a temple around the ‘samadhi’ in 1931 AD. Ramdevra Mela is held in Runeecha Ramdevra which is attended by thousands of devotees from all around the world.

It is held in between August & September from Bhadon Sudi 2 (Beej) to 11 (Ekadashi). Devotees are irrespective of caste, creed or religious affiliations, throng to Ramapir’s shrine. They pay their homage by singing Bhajans & Devotional songs.

Baba Ram Dev Ji believed in the equality of all human beings, both high and low, rich and poor. He helped the down-trodden by granting them their wishes. The place of Ramdevra is named after Baba Ramdev and Muslims also pay homage to this saint with lots of respect.

Rice, coconuts, churma and wooden horses in the form of toys are offered to Ramdevji by the devotees in the temple.

How to Reach Ramdevra Fair

Baba Ramdevji Temple is located in Ramdevra, Jaisalmer. Jaisalmer city is well connected by road and train. There is a number of bus services to Jaisalmer.

And especially during Ramdevra Fair, there is a number of buses from nearby states like Gujarat, Madhya Pradesh, and Haryana. Most of the cities in Rajasthan have bus services to Jaisalmer.

By Bus (Road): Devotees can easily reach Ramdevra by bus since there are daily Buses from Bikaner, Jodhpur, Jaisalmer to Ramdevra (Runicha). 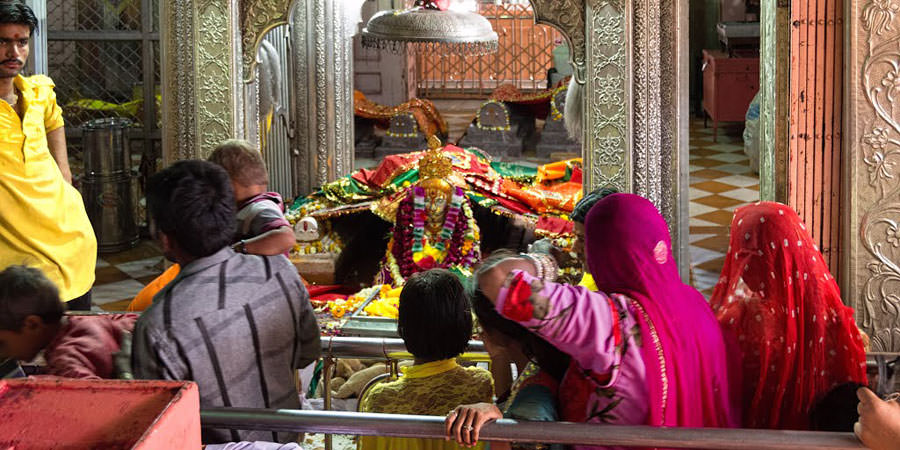 Great Saint for all community either Hindu or Muslim.