Built by the Arjun Pal, founder of Karauli in the 14th century, now city palace only has some remains. The structure which one can see in the name of the city palace was erected by Rajas Gopal Singh in the 18th century. City Palace of Karauli has many colors like the red, white and off-white stone was used in its construction and painted with bright colors. From the terrace, one can see the spectacular view of the city. Pathways and stairways are also very amazing to walk over them.

City Palace of Karauli is a 14ht century Palace which was built with amazing architectural stuff like beautiful sculptures and stucco work.

It was the royal residence of the royal family of Karauli till 1938 when the family shifted to the Bhanwar Vilas Palace.

Diwan-i-Aam‘ has attractive work on the walls with floral patterns colored with bright colors.

Used by the king to met his subjects and discuss important work, this hall’s upper floor has marvelous jaali work on the walls from where Ranis could watch over the proceedings of the hall.

Another hall – Rang Mahal known for its magnificent cloured glass ‘Jharokhas’ and mirror theme spreads from the hall, walls to bedrooms. ‘Barahdwari’ – a hall for women dancing purpose has a line of portraits of the Kings.

City Palace was gifted to the Madan Mohan Trust ( the sole trustee of which was Raja of Karauli) in order to avoid taxes. Now the restoration of the palace is going on.

How To Reach City Palace, Karauli

By Road: City Palace is located in the main bazaar of Karauli city. One can easily reach here by local bus or local taxi, rickshaw or by walk.

By Air: City Palace can be reach through nearest Jaipur Airport (161 Km) which is well connected with regular domestic flights to Delhi, Mumbai. 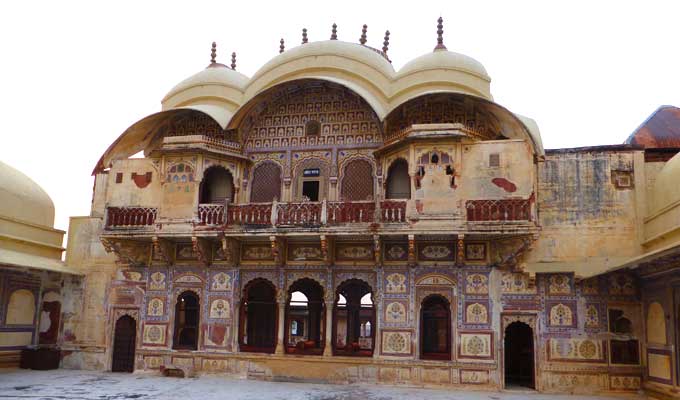