Hawa Mahal is also known by the name of "Palace of Winds" is one of the most famous places to visit in Jaipur. It was built in 1799 by Maharaja Sawai Pratap Singh in the form of the crown of Krishna, the Hindu god. Its unique five-stories outside is also equivalent to the honeycomb of the beehive with its 953 small windows called jharokhas that are decorated with elaborate latticework. It was built for the wife of the king. so that they can have a glimpse of the everyday life of the city. The latticework on the small windows of the Hawa Mahal was done so that the queens could not be spotted from outside but can see everything clearly from behind it.

It is blended with the different colors of the Rajputana architecture. Maharaja Sawai Pratap Singh was a great devotee of Lord Krishna due to which he decided to build Hawa Mahal in the form of the crown of Lord Krishna and built is in the shape of a honeycomb.

Maharaja Sawai Pratap Singh built the structure in 1799 which was designed by Lal Chand Ustad. The front portion of the building is like a honeycomb web of a beehive which is built with a number of small windows.

The lattice work done in the Hawa Mahal was done initially for the Royal ladies so that they can see the daily life of the city from those small holes.

Hawa Mahal is a famous Rajputana architecture and the most famous tourist attraction of Jaipur.The palace is constructed in a five-story pyramidal shaped monument that rises to a height of 50 feet.

The front portion of the building is like a honeycomb web of a beehive which is built with a number of small windows. Each porthole has miniature windows and has carved sandstone grills, finials, and domes.

It is a veritable mass of semi-octagonal bays, which gives the monument its single frontage. The Hawa Mahal was built on another purpose of keeping the Queens and other royal women in “purdah” but still, they can see the external activities.

The craftsmanship of the fort of a fusion of Hindu Rajput architecture and the Islamic Mughal architecture; the Rajput style of architecture can be seen in the domed canopies, channeled pillars, lotus, and floral patterns, and the Islamic style is evident in its stone tile latticework work and curves which are as renowned for its similarity with the Panch Mahal which is known as the palace of winds of Fatehpur Sikri.

An archaeological museum is also housed in this courtyard. Almost every season of every morning people from around the world, go to see the magnificent Hawa Mahal in Jaipur.

The tourists prefer to watch it in the beauty of the morning sunlight.

The entry to the Hawa Mahal from the city palace side is through a grand door of the fort.

It opens into a large courtyard, which has double storied buildings on three sides, with the Hawa Mahal enclosing it on the east side.

How To Reach Hawa Mahal

Hawa Mahal is one of the most important landmarks of Jaipur city. So once you reach the city, there will be no problem reaching Hawa Mahal.

By Road: Jaipur City is well connected via road to another part of the Rajasthan and neighboring cities.

There is a number of buses which connect Jaipur to other cities of Rajasthan and India.

By Rail: Jaipur Railway Station is one of the important stations in Northern India and is connected to about every major cities of India and Rajasthan.

By Air: Jaipur International Airport is the nearest airport of the city about 13 km away from the main city center. 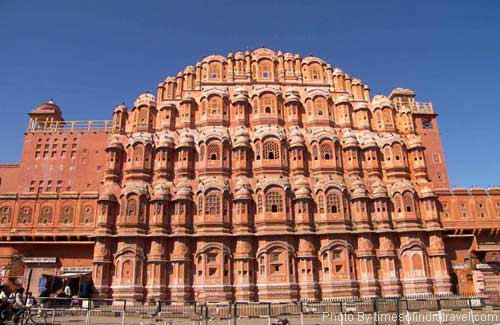