Khimsar Fort was constructed by Rao Karamsiji, the 8th son of Rao Jodhaji, the founder of Jodhpur in the 16th century. This yellow-colored fort is the most popular tourist attraction of Khimsar, located at the edge of the Thar Desert and is an example of Rajputana style of architecture.

Originally, the fort was constructed for the purpose of wars, and later on, in the 18th century, the royal family shifted into it. Zanana, a special wing exclusively for the royal women was added later.

The lawn of the fort is spread over 11 acres, and it further enhances the beauty of the surroundings. Half part of the fort is still occupied by the ancestors of the royal family while the other half has been converted into a heritage hotel.

The fort offers 68 luxuriously rooms of which some has the traditional architecture & furnishings, while others have Art Deco, yet equipped with all modern facilities for your comfort.

By Road: Khimsar Fort is located at the outskirts of Khimsar city. One can easily reach here by bus or taxi from Falna.

By Air: Khimsar Fort can be reach through nearest Jodhpur Airport (90 km) which is well connected with regular domestic flights to Delhi, Mumbai. 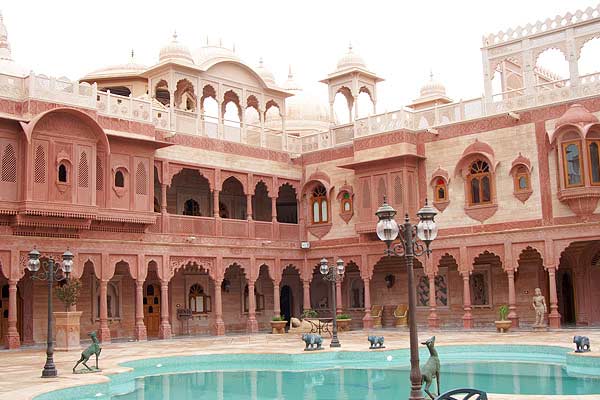