Known as the motherland of many well established Marwari business families, Nawalgarh is one of the largest and busiest towns in Shekhawati region. Nawalgarh is also famous for its Havelis, temples, palaces and Nawalgarh Fort. Founded by Thakur Nawal Singh Ji Bahadur (Shekhawat) in 1737 AD, Nawalgarh is located in the midway between Jhunjhunu and Sikar.

A small room in a fort called ‘Bala Quila’ is famous for its artistic mirrored walls and murals which exhibits cities and armies of Jaipur and Nawalgarhin 1850s.

Now owned by a family and entry fee is Rs 10.

This palace is famous for its lush green garden and beautiful fountains. It is now converted to a heritage hotel.

Poddar Haveli- Built in 1920 AD, this Anandi Lal Poddar Haveli is the only haveli in Shekhawati which is restored by its owner.

It also houses a school, dolls in traditional dress and an artistic display of local fairs and festivals.

How To Reach Nawalgarh, Jhunjhunu

By Road: Nawalgarh is located midway at 34 km from Sikar and 40 km from Jhunjhunu on Bypass Rd. One can easily reach here by hiring taxi or by RSRTC bus .

By Air: Nawalgarh can be reach through nearest Jaipur Airport (156 Km) which is well connected with regular domestic flights to Delhi, Mumbai. 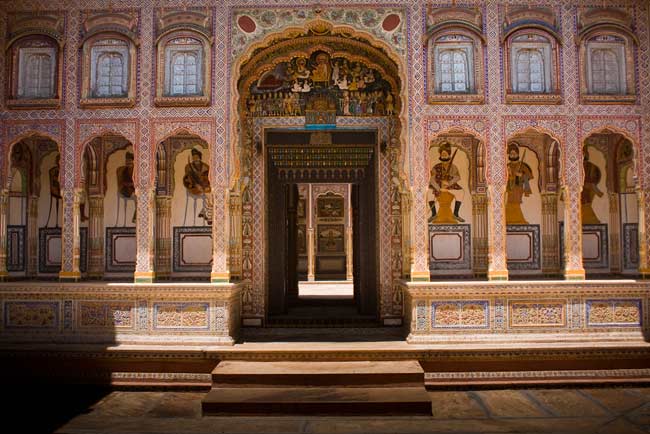 The Piramal Haveli in Jhunjhunu