Jhunjhunu district is a district of the Indian state Rajasthan in western India. The town Jhunjhunu is the district headquarters. Jhunjhunu is a well known trading hub and is home to plenty of industries.Jhunjhunu district was named on ruler Jhunjhar Singh Gi, who was from Shekhawat clan of Rajput.There are many interesting places that one can visit in the town and these include forts, havelis and other old buildings.

Jhunjhunu district is located in North-Eastern Rajasthan with Churu to its the North-West, Hissar and Mahendragarh on its North-East and by Sikar to its in the South and South East and West.

Nearest airport is Sanganer Airport, Jaipur which is at a distance of 150 km. Jhunjhunu is the nearest railhead to Shekhawati. It is on the broad gauge line connecting Mumbai to Delhi. Government and private buses are available in Jhunjhunu with good road network to other major cities . 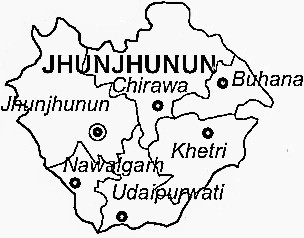