Kaylana Lake, an artificial water body, is located at a distance of 8 km west of Jodhpur city on the Jaisalmer road. It was constructed by Pratap Singh, the then prime minister of Jodhpur in 1872 on the site of two former palaces and gardens. It is said that old palaces and gardens were shattered to construct this lake. The Lake is spread over 84 square km and is a tremendously scenic picnic spot and also functions as an important tool.

The Kaylana lake is enclosed by a garden known as Pratap Sagar, where variant species of birds can be seen. The major attraction of the lake is the incredible view of the sunset from here. At this time the sky looks like a canvas splashed with spectacular colors.

The area around this lake was once full of wild bears, serving as a hunting place for the royal members. But, with the increase in population, it has not remained so. This lake has another part known as Takhat Sagar Lake, located around 10 km away from Jodhpur city and named after the King Takhat Singh who ruled Jodhpur during the 19th century.

There is also a Dak Bungalow of PHED, the Irrigation department near the Lake. Boating facility is also made available for tourists by the Rajasthan Tourism Development Corporation. But swimming is discouraged here. Tourists can easily hire an auto rickshaw or private cab to reach the destination. 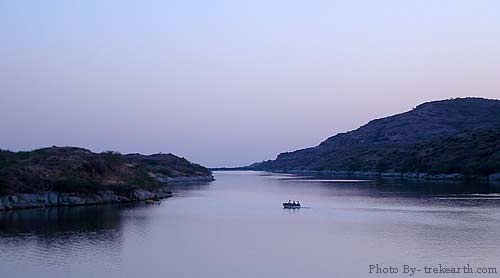