The Pushkar Lake is a semi-circular shaped sacred water body, also known as 'TirthaRaj’ According to the Hindu mythology, the lake was created from one of the petals that fell from the lotus flower with which Lord Bramha killed the demon Vajra Nabh. The Pushkar Lake is surrounded by more than 300 temples and has 52 ghats, where devotees take a holy bath. It is a belief that if a person takes a holy dip in the lake on Kartik Purnima, then that person attains salvation it is also a belief that taking a sacred bath in the lake clears one from all sins and that it cures all skin diseases.

A week long fair before Kartik Purnima is very famous. Known as ‘Pushkar Fair or Pushkar Camel Fair‘, it witness over 50000 camels with lakhs of visitors.

The history of Pushkar Lake dates back to 4th Century BC. Though the creation of Pushkar Lake as an artificial lake started in 12th century when a dam was built over the Luni river. Guru Govind Singh is said to have given sacred speech of the Guru Granth Sahib at the Bank of the Lake.

The Rajput rulers of Amber, Bundi, Bikaner and Jaisalmer made great efforts to restore the importance of the lake and its surrounding temples. After that many kings of the Different area built ghats over the lake.

Pushkar Lake is one of the most revered sites in Rajasthan and home to the only Brahma Temple of the World. Also the lake gets crowded during various festivals and the famous Pushkar Camel Fair.

Temples Near Pushkar Lake : There are about 500 temples located at the shore of the lake of which many were destroyed during the Mughal rule in India. The most important of these is the Brahma Temple which is believed to be about 2000 years old though the architecture is of 114th century.

Ghats at Pushkar Lake : There are about 52 ghats at the lake which is used by pilgrims to take bath. But 10 of these are most famous and are important historical architecture too. These are the Varaha Ghat, the Dadhich Ghat, Saptarishi Ghats, Gwalior Ghat, Kota Ghat, Gau ghat, Yag Ghat, Jaipur Ghat, Karni Ghat and Gangaur Ghat.

Pushkar Fair : Pushkar Camel Fair is Asia’s largest camel fair which commences on Prabodhini Ekadashi, the 11th lunar day in the bright fortnight and ends on Kartik Poornima – the full Moon day in the month of Kartik (October– November) . The lake becomes too crowded during this time as it is said that taking bath on Kartik Poornima is very blissful and wash away all you sins.

How To Reach Pushkar Lake, Pushkar

By Road: Pushkar Lake is located at the centre of Pushkar city. One can easily reach here by hiring taxi or bus from Ajmer.

By Air: Pushkar Lake can be reach through nearest Jaipur Airport (148 Km) which is well connected with regular domestic flights to Delhi, Mumbai. 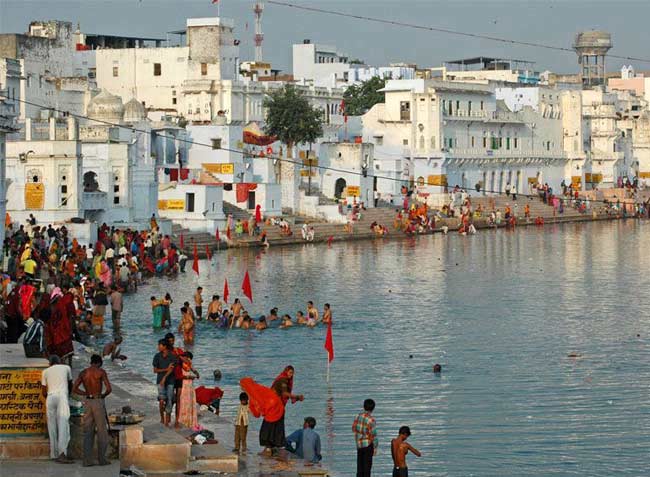