Adishwar Temple in Pali is also known by other name 'Chaumukha Temple' also. This 15th-century temple shrine known for the unique architectural style of a Nalinigulm Vimana, a heavenly aircraft. Adishwar Temple took 65 years for the construction and is the largest Jain temples. Temple has three stories, 80 domes, and 29 halls.

Visitors get surprise by seeing the pavilions of the temple which are supported by 1444 pillars. The innermost part of the temple is adorned with a four faced image of Lord Adinath or Rishabhdev.

How To Reach Adishwar Temple, Pali

By Road: Adishwar Temple is located at Sanderao near Pali city. One can easily reach here by bus or taxi.

By Air: Adishwar Temple can be reach through nearest Jodhpur Airport (75 km) which is well connected with regular domestic flights to Delhi, Mumbai. 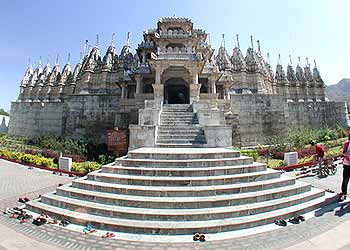