Swaminarayan Mandir Akshardham Temple is one of the well-known tourist attractions of Jaipur. The temple is known for its beautiful architecture, magnificent idols, sculptures, and carvings. and is dedicated to the Hindu God, Narayan. Akshardham temple provides a real glimpse of Indian architecture, cultural heritage, and sculptures of Hindu gods to the visitors. It is located in the Vaishali Nagar, Jaipur.

Akshardham Temple  Jaipur has not such legendary history since it is a modern temple which was built recently in between 19th and 20th century.

But it still depicts the architectural wonders of Indian temples and is one of the most visited temple in Jaipur city.

The temple is located in Vaishali Nagar and is visited by millions of devotees all round the year. The idol and the temple buildings offer a place fo serenity and peace.

The temple is surrounded by bu lush green gardens and fountains. Its unique architecture is what attracts most of the tourists here. The walls of the temple are beautifully decorated with the number of sculptures and carvings which feel amazing to watch.

The main idol of the temple which is Lord Vishnu, is decorated with the gold and silver ornaments.

How To Reach Akshardham Temple, Jaipur

By Road: Akshardham Jaipur Temple is located in the heart of Jaipur city near the Gandhi Path. Nearest bus stand is Govind Nagar. It is in Ambedkar Mandir Rd.

By Air: Akshardham Temple can be reached through Jaipur Airport, also called Sanganer Airport which is well connected with regular domestic flights to Delhi, Kolkata, Mumbai, Ahmedabad, Jodhpur, and Udaipur. 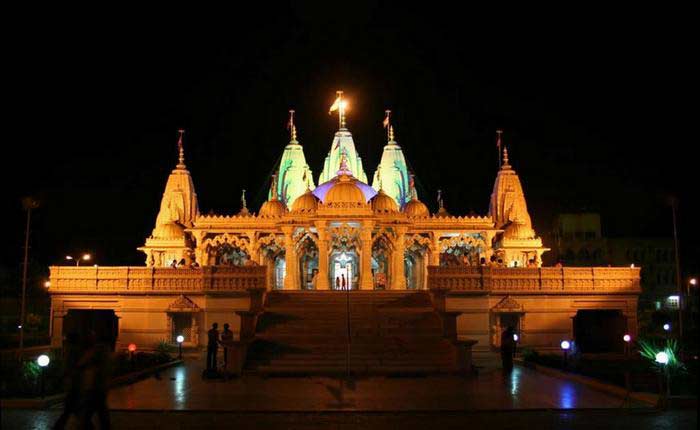 3 Responses to “Akshardham Temple in Jaipur”

Is there any entry ticket for entering in temple?
What is the arti timing of the temple?
Is there any dress code?

Please cortrect the Sandhya & Shayan Aarti timings in the list.