Galtaji Temple in Jaipur is an ancient Hindu pilgrimage site in the town of Khaniya-Balaji, Rajasthan. Diwan Rao Kriparam, an attendant to Sawai Jai Singh II, in the 18th Century, built the Galtaji Temple. The story behind this temple is that Saint Galav spent 100 years here in performing his 'Tapasya'. Happy with the Galav, the gods bless him with abundant water. The site consists of several temples and sacred kunds (water tanks) in which pilgrims bathe.

Saint Galva who made his penance for about 60,000 years in Satyuga and according to the ancient belief he brought the sacred Gangaji to Shri Galtaji which comes out of the Gau-mukh. Diwan Rao Kriparam, an attendant to Sawai Jai Singh II, in the 18th Century, built the Galtaji Temple.

The Galtaji temple, one of the jewels of Jaipur, has a marvelous complex with natural freshwater springs and 7 holy ‘kunds’ or water tanks.’ Galta Kund’, among all, is the holiest one and is believed to never get dry.

A spring of pure water flows from the ‘Gaumukh’, a rock shaped like a cow’s head, into the tanks. Galta temple is situated in the Aravallis, so it is surrounded by dense trees and bushes.

Its awesome buildings are ornamented by painted walls, adorned by rounded roofs and pillars. Also known as the ‘Monkey Temple’, it was recently featured on National Geographic’s multi-award winning series ‘Monkey Thieves’

Galtaji Temple Timings: Sunrise to Sunset, on all weekdays

Galtaji temple is located at 10 km from Jaipur city. Jaipur is well connected with road, rail, and air. Jaipur is just 268 kms from Delhi. 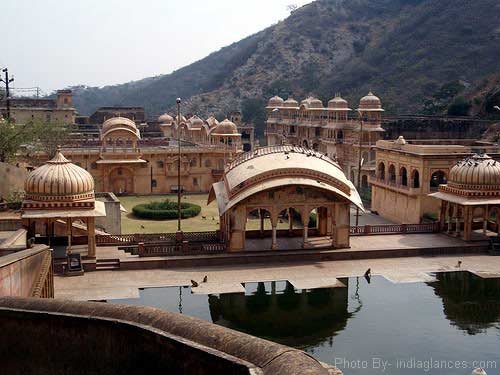