Garh Ganesha Temple is devoted to Lord Ganesha. It is believed that Ganesha is present in the temple in the form of small child - Purushakriti. Located at the top in he Aravali hills, close to the Nahargarh hill. In the Garh Ganesha temple, Lord Ganesha is established in the statue of child Ganesha - Vigra Purushakriti (without trunk).

Garh Ganesha temple was build by Maharaja Sawai Jai Singh - I when he performed the "Ashwamegha Yagya" before the establishment of Jaipur. He made the shrine and place the statue of Lord Ganesha. After that he kept the foundation stone of Jaipur. He also kept the statue in such a way that Maharaja could be able to see the statue with the help of binoculars from the Chandra Mahal of City Palace, Jaipur. Garh Ganesh also has 'Dhwajadheesh' Ganesha's temple of Bari-Chaupar as its part.

On the Ganesh Chaturthi in Bhadrapad Shukla Paksha, the fair of five days is organized every year. Also on the first Wednesday after “Diwali”, ‘anna-Koot’ is celebrated on the temple and on last Wednesday ‘Paush month’ is celebrated by organizing ‘Paush bade’. The total arrangement and management of the temple are overlooked by ‘Audhchya’ family. Presently honorable Shri Pradeep Audichya is the chief priest of the Garh Ganesh temple. He is the 13th priest of the temple.

How To Reach Garh Ganesh Temple

By Road: Garh Ganesh temple is located near Brahmpuri, Jaipur and located in the outskirts of the city on the Gaitor road. It is at a distance of 7 km from Jaipur Railway station and bus and taxi are easily available. 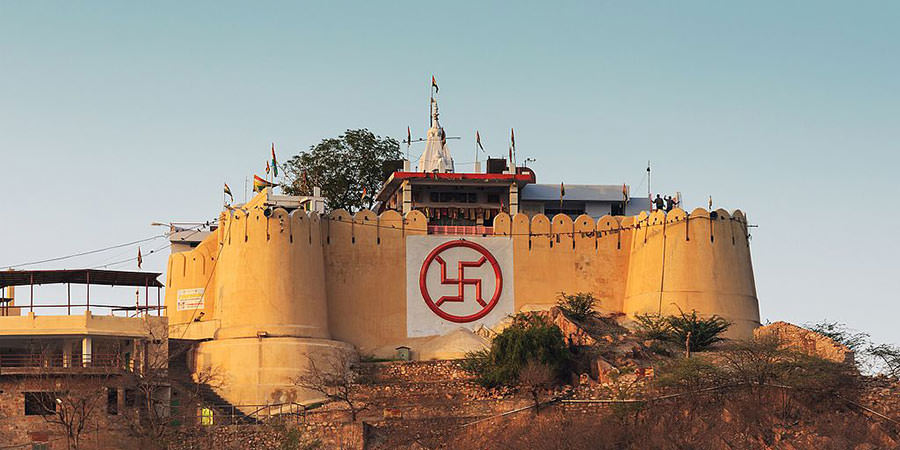