Moti Dungri or Pearl Hill is popular due to the presence of a palace and a shrine. A temple dedicated to the Hindu Lord Ganesh is located on top of the hill. This palace was the home of Sawai Man Singh II, the last king of Jaipur and later became the residence of Jagat Singh, the son of Sawai Man Singh II. Moti Doongri Palace is built in Scottish Castle style and with a superb architecture which attracts many tourists and makes Moti doongri a favorite hot spot. Now it is a private property of the royal family and nobody allowed to visit inside the palace.

The temple can be visited throughout the day. 7 Dharshans are arranged in a day and there are different set of prayers (bhajans) for every adorned appearance of the deity.

By Road: Moti Doongri is located in the heart of Jaipur city near the University of Rajasthan. Nearest bus stand is University bus stand. It is in Agra-Bikaner road.

By Air: Moti Doongri can be reached through Jaipur Airport, also called Sanganer Airport which is well connected with regular domestic flights to Delhi, Kolkata, Mumbai, Ahmedabad, Jodhpur, and Udaipur. 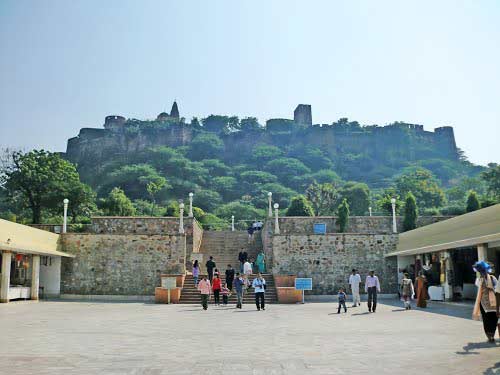