The Osian Temple is situated about 65 km north of Jodhpur city in a small village, Osian. There is an array of about 100 ruined Jain and Hindu temples in the Osian village that backdates to the 8th and 12 centuries. Osian is located on the boundary of the Thar desert, on the Jodhpur- Bikaner highway. It is also known as the 'Khajuraho of Rajasthan'. The city of Osiyan is said to have founded by Utpaladeva, who was a Rajput Prince belonging to the Pratihara Dynasty. In those times, the city was named as Ukesha or Upkeshapur and was a major religious center of the kingdom.

Out of the many beautifuly architectured temples only 18 shrines are still there unfolding the royal legacy of past. Amongst these temples, Surya (Sun) Temple, Harihara Temple, Sachiya Mata Temple and a Jain temple dedicated to Lord Mahavira get the prime importance.

Osian is regarded as a prominent pilgrimage site for Oswal Jain community. Ravages of the time have destroyed these temples to an extent, still their charm attract people to visit the ancient city of Ossian.

Architecture and Temples in Osian

The Surya temple of Osian back dates to the 10th century. As the name suggests, this temple is dedicated to the Hindu God, Lord Surya or Sun God. The altar comprises the striking idol of Lord Surya. Visitors can also see the idols of Lord Ganesha and Goddess Durga in the main hall.

The ceiling of the temple is adorned with the images of serpents coiled around lotus flowers. The life-story is depicted here in the form of murals and scriptures. The structure of this temple is often compared with the Sun Temple at Ranakpur.

The Sachiya Temple is dedicated to the Hindu Goddess Sachi , the wife of Lord Indra (Rain God). Sachi Mata is also known as Indrani. The initial structure of the Sachiya Mata Temple was built in the 8th century while the present materialized structure was constructed during the 12th century. This hisoric temple has two other shrines that are dedicated to Chandi Devi and Amba Mata respectively.

The interiors of the temple are decorated with beautiful images and sculptures of deities from the Hindu pantheon. This ancient temple, depicting a perfect example of the medieval architecture is a worth seeing place. There are three Hariharan temples in Osian.

The first two temples were built in the 8th century while the third one was built iin the 9th century. These temples, that dates back to the medival period, are dedicated to Lord Hariharan, a union of Lord Shiva and Lord Vishnu. All these temples are resplendent with sculptures and are built on a raised platform.

The architecture of these temples are quiet different and advanced as compared to the other temples of Osian. The Mahavira temple was built by Pratihara King Vatsa in 783 AD and dedicated to Lord Mahavira, the 24th Jain Tirthankara. The main shrine is placed on a high platform made of sandstone.

The altar encompasses the idol of Lord Mahavira. In the hall, three balconies make the altar well ventilated. The temple with stunning architecture is considered as an important pilgrimage of the Jains.

The main door of the temple is curved with an of young maids on it. The main balcony is adorned with instricately carved pillars and in another balcony one can find a shade of quiet stylish construction.

Timings- Devotees can visit the temple from dawn to dusk.

Location: Osian is located 65 kms away from the Jodhpur city on the Jodhpur- Bikaner Highway. Tourists can easily make it with the help of private and public conveyance. 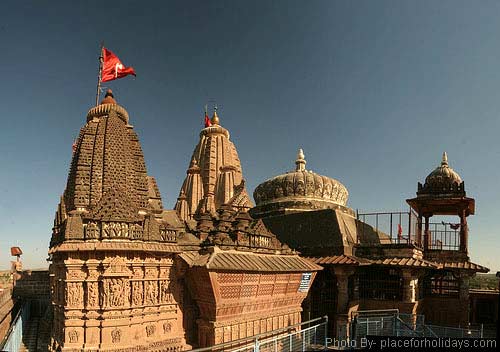