Shri Digamber Jain Temple Sanganer in Jaipur is one of the teerth of the Jain community in India. It is located 14 km south of Jaipur city. Lord Adinath (Rishabh Dev), is the principal deity of this temple. Lord Adinath was the first tirthankar of Jain's supposed to be 4000 years old. Digamber Jain Temple of Jaipur is one of the jewels in the city and has the finest architecture and carvings found also in the Dilwara temples of Mont Abu. Made up of red stone with, it was constructed in 10th century A.D, according to the Vikram Samvat 1011 inscription on one of its pylons (Toranas).

Also known as Jain temple of Sanganer, it also has high ‘Shikhara’ (Spires) and its inner sanctum is a stone shrine with sky high eight Shikharas (Pinnacles).

There is a small ancient temple in the middle of the underground portion which is a guard by the Yaksha (Devas).

Main part of the Jain temple of Jaipur is artistic inner temple called nij-mandir which is a stone shrine with three pinnacles. There is an idol of Parshwanath with 7 serpent hoods and around them beautiful carvings of lotuses, elephants and creepers are present.

The main idol of Lord Adinath is placed in the shrine of this small temple.

How To Reach Jain Temple, Jaipur

By Road: Jain Temple is located in the Jaipur city, in the Kota – Jaipur road. Nearest bus stand is city bus stand and one can easily reach here with local taxi or cab.

By Air: Jain Temple can be reached through Jaipur Airport, also called Sanganer Airport which is well connected with regular domestic flights to Delhi, Kolkata, Mumbai, Ahmedabad, Jodhpur, and Udaipur. 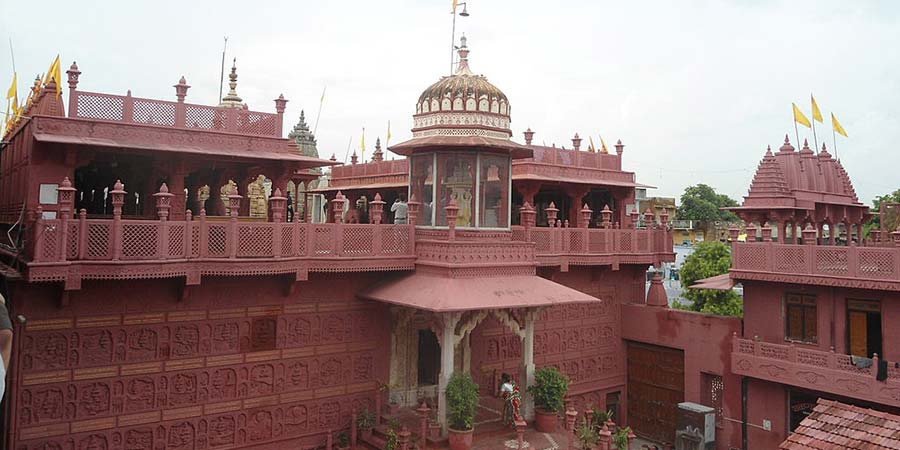