Tanot Mata Temple or Maheshwari Tanot Rai Mandir  is the same temple you have seen many times in the Bollywood 'Border' movie. Tanot Mata temple remained untouched despite the heavy shelling by Pakistan during the Indo-Pak war of 1971. The temple is located very close to India - Pakistan Border and tourist are not allowed to go beyond this temple. As per the oldest Charan literature, Tannot Mata is a new clone of divine goddess Hinglaj Mata, and than after Tannot Mata becomes Karni Mata, And known as Goddess Of Charan's.

Goddess Tanot is believed to be the incarnation of Goddess Hinglaz which is located in the Lasvela district of Baluchistan. In 847 AD foundation of Goddess, Tanot was kept and the idol was installed. Generation of Bhati Rajput takes care of this temple.

Earlier during the Indo-Pak war of 1965, Tanot Mata temple did not even touch by targeted bombs by Pakistan Army whereas all the bombs did not explode which falls in the vicinity of the temple due to Goddess Tanot divine power.

Those unexploded bombs now can be seen in the Tanot Mata temple museum. After the war, the Border Security Force of India continues to manage this holy temple to date. Located very close to the battle site of Longewala- Jaisalmer, visitors cannot go beyond the temple.

Tanot Mata temple is located 150 km from Jaisalmer city and one can reach only by hiring a private taxi which takes about 2 hours. There is no mobile network other than BSNL, so be careful.

The road to Tanot is surrounded by miles and miles of sand dunes and sand mountains. The temperatures in the area can go up to 49 °C and the ideal time to visit the place is from November to January. 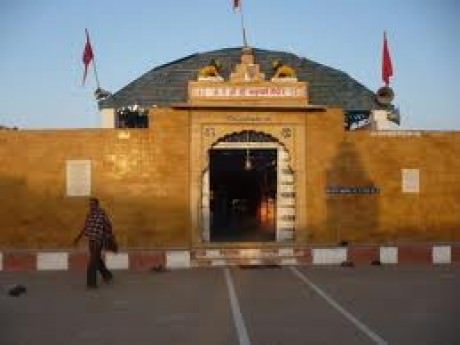